The oldest evidence of the dinosaur lineage—fossilized tracks—is described this week in Proceedings of the Royal Society B. Just one or two million years after the massive Permian-Triassic extinction, an animal smaller than a house cat walked across fine mud in what is now Poland. This fossilized trackway places the very closest relatives of dinosaurs on Earth about 250 million years ago—5 to 9 million years earlier than previously described fossilized skeletal material has indicated. The paper also described the 246-million-year-old Sphingopus footprints, the oldest evidence of a bipedal and large-bodied dinosaur.

"We see the closest dinosaur cousins immediately after the worst mass extinction," says Stephen Brusatte, a graduate student affiliated with the Division of Paleontology at the American Museum of Natural History. "The biggest crisis in the history of life also created one of the greatest opportunities in the history of life by emptying the landscape and making it possible for dinosaurs to evolve."

The new paper analyzes three sets of footprints from three different sites in the Holy Cross Mountains of central Poland. The sites, all quarries within a 25-mile radius of each other, are windows into three ecosystems because they represent different times periods. The Stryczowice trackway is the oldest at 250 million years. The Baranów trackway is the most recent at 246 million years of age while the Wióry trackway is sandwiched in time between the others.

Because footprints are only an imprint of a small part of the skeleton, identification of trackmakers is often tricky. Luckily, dinosaurs have a very distinctive gait, especially when compared to their diapsid relatives (the evolutionary group that includes birds, reptiles, and extinct lineages) like crocodiles and lizards. While lizards and crocodiles have a splayed walking style, dinosaurs place their two feet closer together. The footprints at all three Polish sites show this feature as well as indisputable dinosaur-like features, including three prominent central toes and reduced outer two toes, a parallel alignment of these three digits (a bunched foot), and a straight back edge of footprints, additional evidence of a dinosaur-like simple hinged ankle.

Because all of these features are seen in footprints at the oldest site, Brusatte and colleagues conclude that the Stryczowice prints—which are only a few centimeters in length—are the oldest evidence of the dinosaur lineage. These dinosaurs, though, are considered "stem dinosaurs," or the immediate relatives of dinosaurs not part of the slightly more derived clade that technically defines dinosaurs. Also, this animal did walk on all four limbs, an abnormal posture for early dinosaurs and their close relatives, although it appears that its forelimbs were already being reduced to more dinosaur-like proportions since the footprints overstep handprints.

The Baranów and Wióry trackways show changes early in the evolutionary history of dinosaurs. Wióry at 248� million years ago shows slight diversification in the types of tracks, but all tracks remain quadrupedal. Footprints from Baranów at 246 million years ago, however, may be the earliest evidence of moderately large-bodied and bipedal true dinosaurs. These tracks, which are called Sphingopus, are 15 centimeters long.

"Poland is a new frontier for understanding the earliest evolution of dinosaurs," says Grzegorz Niedźwiedzki of the University of Warsaw and the Polish Academy of Sciences, who led the project and has been excavating footprints from the three sites for nearly a decade. "It used to be that most of the important fossils were from Argentina or the southwestern U.S., but in Poland we have several sites that yield footprints and bones from the oldest dinosaurs and their closest cousins, stretching throughout the entire Triassic Period."

Finally, although the dinosaur group emerged soon after the Permian extinction, dinosaur-like tracks are rare in the footprint assemblages, representing only 2𔃁 percent of the prints discovered as opposed to 40󈞞 percent for crocodile-like archosaurs. Dinosaurs became more abundant tens of millions of years later.

"For the first 20󈞞 million years of dinosaur history, dinosaurs and their closest relatives were living in the shadow of their much more diverse, successful, and abundant crocodile-like cousins," says Brusatte. "The oldest dinosaurs were small and rare."

In addition to Brusatte and Niedźwiedzki, Richard Butler of the Bayerische Staatssammlung für Paläontologie und Geologie in Germany was an author of the paper. Brusatte is also affiliated with Columbia University. The research was funded in part by the National Science Foundation, the Percy Sladen Fund, the Alexander von Humboldt Research Fellowship, and the University of Warsaw. 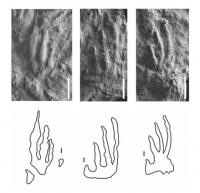