The world's record for the smallest land snail is broken once again. A minute shell with an average diameter of 0.7 mm was found in Malaysian Borneo by a team of Dutch and Malaysian biologists along with another 47 new species of greatly varying sizes. Called 'dwarf' ("nanus" meaning "dwarf" in Latin), the new snail, Acmella nana, is first-shown to the world in the open-access journal ZooKeys, where the last record-holder was announced only about a month ago.

The world's tiniest snail has a shell of merely 0.50 - 0.60 mm width and 0.60 - 0.79 mm height. The previous holder of the title of world's smallest snail, the Chinese Angustopila dominikae, published earlier this year, measured just 0.80 and 0.89 mm respectively.

Some of the new 48 species described in the present paper are widespread in Borneo and had been familiar to the team of snail researchers for decades. Yet, they had not got round to naming them until now. Others eke out a hidden existence on mountain tops or in rare vegetation types and, therefore, were only recently discovered by the authors. For instance, there are seven new species that can only be found on the 4,095-metre-high Mount Kinabalu. Another example, called Diplommatina tylocheilos, only lives at the entrance of the hardly accessible Loloposon Cave in Mount Trusmadi.

The new information tells us more about isolated, or endemic, species such as the new record-holder. Moving so slowly, snails can easily get stuck in very small patches of a habitat. There they can spend long enough to evolve and adapt to the particular limited area, undisturbed by the rest of the world. This makes them excellent examples of how endemic species can arise.

On the other hand, their restricted distribution makes them key targets for biodiversity conservation. "A blazing forest fire at Loloposon Cave could wipe out the entire population of Diplommatina tylocheilos," says co-author Schilthuizen.

The discoveries are the latest result of an ongoing research project on the snail fauna of Borneo by the authors. For more than twenty-five years, Jaap Vermeulen, Thor-Seng Liew, and Menno Schilthuizen of Naturalis Biodiversity Center and Universiti Malaysia Sabah, have been documenting Malaysia's wonderful terrestrial molluscs. Only last year, also in ZooKeys, the team published ten new Malaysian species of the "micro-jewel" snails of the genus Plectostoma. 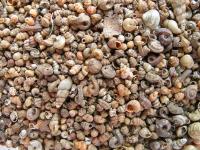