Cataglyphis fortis desert ants can learn visual or olfactory cues to pinpoint their nest, but only if these cues are unique to specify the nest entrance. Scientists from the Max Planck Institute for Chemical Ecology in Jena, Germany, discovered that the insects ignore visual landmarks or odors as nest-defining cues, if these occur not only near the nest but also along the route. Hence, ants are able to evaluate the informative value of such cues and are not fooled by ubiquitous unreliable cues. (Current Biology, November 2017, DOI: 10.1016/j.cub.2017.10.039)

Homing desert ants are able to distinguish unambiguous from ambiguous landmarks and include this information in their behavioral responses when returning to their nest. This ability became obvious in behavioral experiments in Tunisia. "The ants ignored visual or olfactory cues that were not reliable. Unreliable nest cues are those that are not only found at the nest entrance, but are ubiquitous along the route. The ability to assess the informational value of visual landmarks or odor trails as relevant or irrelevant for the nest search is another example of the amazing cognitive performance of the tiny ant brain," says Roman Huber, the first author of the study.

The desert ant Cataglyphis fortis is a navigational miracle. The insects live in the barren salt pans, dry salt lakes in the North African Sahara. Hardly any other animal can be found in this wasteland. The ants live in subterranean nests and spend entire days, solitarily foraging for food: usually insects blown by the wind into the inhospitable environment where they died from exposure. In order to find food, the ants often have to cover large distances. "What is special about these insects is the fact that ants returning home from foraging are desperate to find their nest. You can therefore catch them anywhere and place them in a specific test situation. While other animals would immediately drop their piece of food and try to disappear, the ants stick to their innate homing behavior. By manipulating the environment we can identify the navigational means the ants use for orientation," Markus Knaden, who heads the "Odor-Guided Behavior Group" in the Department of Evolutionary Neuroethology, explains why he keeps returning to Tunisia in order to perform experiments with these fascinating animals.

Previous studies had revealed that desert ants use the sun as a compass and count their steps to navigate home to their nest. Information about direction and distance are important for so-called path integration, the internal system by which the ants use to "calculate" their way home. Moreover, they use visual, magnetic and vibrational landmarks for navigation. Finally, they find food and their nest entrance with the help of a highly sensitive sense of smell. For the new study, the scientists analyzed the ants' behavior after they had learned specific nest cues and later re-encountered the same landmarks far away from the nest. "You have to imagine a situation like this: If we need to orient ourselves in an unknown city by using a distinctive tower block as landmark and suddenly realize that there are other tower blocks that look quite similar, we get confused. We therefore wanted to know how ants solve this problem," says Knaden.

For their experiments, the researchers built a 16-meter-long aluminum channel in which the ants learned to search for food. As bait in the channel, the scientists set up a Petri dish with biscuit crumbs about 10 meters away from the artificial nest entrance (the natural nest entrance was connected via a tube to the artificial nest entrance). Visual landmarks outside the channel were irrelevant; however, the ants were able to use the sun as a compass. The inconspicuous nest entrance was marked with two black cards. Later, additional black cards were added along the training route to determine whether these would confuse the ants. "We had expected that the ants would somehow respond to the new situation. That they would ignore the black cards they had previously learned as nest cues completely, however, took us by surprise. We were particularly amazed about their behavior towards composite cues, black cards that were additionally marked with an odor. If one part of the landmark was unambiguous and only found near the nest, whereas the other was ubiquitous and found repeatedly along the route, the ants only used the unambiguous part, for example the odor, as reliable information and navigated towards this cue on their way back to the nest. They did not pay any attention to the several other black cards (the ambiguous part of the nest cue) they encountered in the channel," Roman Huber summarizes.

Ants have to travel very long distances in search for food; therefore, errors of path integration often accumulate. However, the animals can compensate for deviations by including additional nest cues, such as visible landmarks or odors. Researchers had previously assumed that the distance to the nest would decide whether the ants trusted path integration more than other cues for orientation. The new study shows that the ants' navigational ability is far more complex than previously thought, because the ants also have to be able to evaluate the reliability of cues.

The orientation of desert ants has been explored mainly in behavioral experiments. In future experiments, the scientists would like to go one step further and establish a calcium-imaging procedure to visualize neuronal activity in the ants. "The more we learn about how much information the ant brain has to consider for orientation, the more we get interested in finding out where and how smells and visual cues are processed in the brain. Potentially, this method could not only show us where a smell is perceived in the brain, but also where it is determined that this smell is a nest cue. This knowledge takes us a considerable step further in researching the extraordinary abilities of these insects," Markus Knaden concludes. [AO] 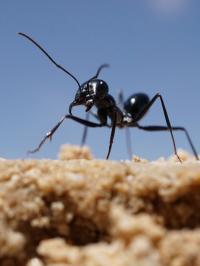