WASHINGTON, April 7, 2020 -- Bottle emptying is a phenomenon most of us have observed while pouring a beverage. Researchers from the Indian Institute of Technology Roorkee discovered how to make bottles empty faster, which has wide-ranging implications for many areas beyond the beverage industry.

Bubbles have been studied extensively for centuries, including early efforts by Leonardo da Vinci who famously noted the sinusoidal rise of bubbles within a pool. The growth dynamics of bubbles at the mouth of a bottle depend on the thermophysical properties of the fluid, the bottle geometry and its angle of inclination. These inextricably intertwined parameters have made bottle-emptying dynamics the next frontier for bubble physicists.

In this week's Physics of Fluids, from AIP Publishing, Lokesh Rohilla and Arup Kumar Das explore this bottle-emptying phenomenon from the perspective of bubble dynamics on a commercial bottle by using high-speed photography. Image analysis allowed them to conceptualize various parameters, such as liquid film thickness, bubble aspect ratio, rise velocity and bottle emptying modes.

"Bubble dynamics inside the bottle are too complex to study, so we divided the bubble interfacial growth into different stages to comprehend them," said Rohilla.

It's well known that a bottle's emptying time is faster if you increase its angle of inclination. This increases what's known as bubble pinch off frequency, and the relative increment depends upon the thermophysical properties of the fluid.

Two distinct bottle-emptying modes were identified. In one mode, the discharge rate is increased due to a high frequency pinch off of air bubbles inside the bottle. In the other mode, it is caused by an increase in volume of the pinched-off bubble at a comparatively lower frequency.

"We've also observed an encapsulated bubble while discharging fluid in a vertically upended bottle," Rohilla said. "Encapsulated bubbles have pinch off sites outside the bottle mouth, contrary to intuition. The presence of a violent ejector jet within inviscid fluids, in which liquid becomes thin due to almost no internal friction, and its complete absence within viscous fluids control the periodicity of the bubbles."

This work proves that bottle geometry and thermophysical properties play a role in reducing the time it takes for a bottle empty.

"We can manipulate the bottle discharge pattern by manipulating bottle geometry," said Das. "An intuitive product-specific bottle design will enable better control of its discharge rate."

The beverage industry and chemical plants are among the applications that will benefit from this better understanding of bottle geometry.

Physics of Fluids is devoted to the publication of original theoretical, computational, and experimental contributions to the dynamics of gases, liquids, and complex or multiphase fluids. See https://aip.scitation.org/journal/phf. 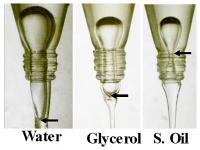