Scientists studying the decline and recovery of seagrass beds in one of California's largest estuaries have found that recolonization of the estuary by sea otters was a crucial factor in the seagrass comeback. Led by researchers at the University of California, Santa Cruz, the study will be published in the Proceedings of the National Academy of Sciences the week of August 26.

Seagrass meadows, which provide coastal protection and important habitat for fish, are declining worldwide, partly because of excessive nutrients entering coastal waters in runoff from farms and urban areas. The nutrients spur the growth of algae on seagrass leaves, which then don't get enough sunlight. In Elkhorn Slough, a major estuary on California's central coast, algal blooms caused by high nutrient levels are a recurring problem. Yet the seagrass beds there have been expanding in recent years.

"When we see seagrass beds recovering, especially in a degraded environment like Elkhorn Slough, people want to know why," said Brent Hughes, a Ph.D. candidate in ecology and evolutionary biology at UC Santa Cruz and first author of the PNAS study. His coauthors include Tim Tinker, a wildlife biologist with the U.S. Geological Survey, and Kerstin Wasson, research coordinator for the Elkhorn Slough National Estuarine Research Reserve, who are both adjunct professors of ecology and evolutionary biology at UCSC.

Hughes and his colleagues documented a remarkable chain reaction that began when sea otters started moving back into Elkhorn Slough in 1984. The sea otters don't directly affect the seagrass, but they do eat enormous amounts of crabs, dramatically reducing the number and size of crabs in the slough. With fewer crabs to prey on them, grazing invertebrates like sea slugs become more abundant and larger. Sea slugs feed on the algae growing on the seagrass leaves, keeping the leaves clean and healthy.

"The seagrass is really green and thriving where there are lots of sea otters, even compared to seagrass in more pristine systems without excess nutrients," Hughes said.

In addition to the sea slugs, small crustaceans known as Idotea are also important grazers on the algae, and they too increase in number when sea otters control the crab population.

This kind of chain reaction in a food web is known to ecologists as a "trophic cascade." Scientists have long known that sea otters have a big impact on coastal ecosystems. Their importance in maintaining kelp forests by preying on animals that graze on kelp is especially well documented. The new study shows sea otters play a slightly different but equally important role in estuarine ecosystems like Elkhorn Slough, according to Tinker.

"This provides us with another example of how the strong interactions exerted by sea otters on their invertebrate prey can have cascading effects, leading to unexpected but profound changes at the base of the food web," he said. "It's also a great reminder that the apex predators that have largely disappeared from so many ecosystems may play vitally important functions."

The sea otter population in Elkhorn Slough has had its ups and downs, reflecting trends in the ongoing recovery of California's sea otters. The slough's initial recolonizing population of about 15 declined in the late 1980s, then grew to nearly 100 in the 1990s before declining again, followed by a recovery over the past decade. These fluctuations in the otter population were matched by corresponding fluctuations in the seagrass beds, Hughes said. Even within the slough, he said, sea otter density varies among the different seagrass beds, and those with more otters have fewer and smaller crabs and healthier seagrass.

The researchers used a combination of field experiments and data from long-term monitoring of Elkhorn Slough to study these interactions. "We used multiple approaches, and they all came up with the same answer," Hughes said.

Eelgrass (Zostera marina) is the dominant seagrass in Elkhorn Slough and elsewhere in the northern hemisphere. Seagrasses in general provide important nursery habitat for juvenile fish, and eelgrass beds along the west coast are especially important for species such as Pacific herring, halibut, and salmon. In addition, seagrass beds protect shorelines from storms and waves, and they soak up carbon dioxide from seawater and from the atmosphere.

"These are important coastal ecosystems that we're losing, and mostly that's been associated with bottom-up effects like nutrient loading. This study shows that these ecosystems are also being hit by top-down forces due to the loss of top predators," Hughes said.

The findings in Elkhorn Slough suggest that expansion of the sea otter population in California and recolonization of other estuaries will likely be good for seagrass habitat throughout the state, he added.

According to Wasson, the study has important management implications, suggesting that to restore valued coastal habitats, it may be necessary to restore entire food webs. "That is a new perspective for us," she said. "Most estuarine managers focus on the bottom-up approach, bringing back marshes and eelgrass and hoping the rest comes along with it. But in this case, it's clear you need to focus on the top and bottom of the food web at the same time."

In addition to Hughes, Tinker, and Wasson, the coauthors of the study include Ron Eby and Eric Van Dyke at the Elkhorn Slough National Estuarine Research Reserve; Corina Marks at California State University Monterey Bay; and Kenneth Johnson at the Monterey Bay Aquarium Research Institute. This work was supported by the National Estuarine Research Reserve System, the California Department of Fish and Wildlife, and the U.S. Geological Survey's Western Ecological Research Center. 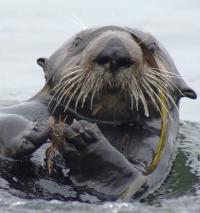