Researchers who normally use high-resolution satellite imagery to study glaciers are using their technology this week to help with disaster relief and longer-term stabilization planning efforts related to the recent earthquake in Nepal.

On April 25, a violent earthquake struck central Nepal, killing more than 7,000 people and destroying hundreds of thousands of homes. The deadliest earthquake in Nepal since 1934, the tremor killed at least 19 climbers and crew on Mount Everest and reportedly produced casualties in the adjoining countries of Bangladesh, China and India.

Two research teams - one at The Ohio State University and another at the University of Minnesota - are working quickly to employ Surface Extraction for TIN-based Searchspace Minimization (SETSM (link sends e-mail)) software to produce high-resolution, 3-D digital surface maps for use in the Nepali relief effort. The Ohio Supercomputer Center is providing the computing power for these data-intensive calculations.

"These data are critical for a range of uses, including mapping infrastructure, planning rescues and assessing slope stability," explained Ian Howat, Ph.D., an associate professor of Earth Sciences at Ohio State and a principal investigator in the Glacier Dynamics Research Group (link sends e-mail) at the university's Byrd Polar and Climate Research Center (link sends e-mail). "Thus far, we have produced a mosaic that models the Kathmandu area with measurements at eight-meter intervals."

"To support this effort, we have granted the SETSM team priority queuing and an emergency allocation of up to 60,000 core hours for use of our flagship supercomputer system, the Oakley Cluster," said Brian Guilfoos, HPC Client Services Manager at the Ohio Supercomputer Center.

The SETSM software is a fully automatic algorithm for deriving the surface maps, called Digital Terrain Models, or DTMs. The maps are created from applying the algorithm to sets of overlapping pairs of high-resolution satellite images acquired by colleagues at the Polar Geospatial Center (link sends e-mail) at the University of Minnesota. The satellite images are acquired from the Worldview-1 and Worldview-2 satellites, owned by DigitalGlobe Inc., and are licensed through the National Geospatial-Intelligence Agency's NextView program. The Polar Geospatial Center will distribute the final products on the organization's website (link sends e-mail).

"Besides improving on this DTM, we will be processing the entirely useable archive of Worldview stereo imagery over Nepal, starting this week, in order to expand coverage," said Myoung-Jong Noh, a member of the Glacier Dynamics Research Group at the Byrd Center and the lead author of a scientific paper (link sends e-mail) on SETSM in the journal GIScience & Remote Sensing.

The DTMs are built using photogrammetric techniques in which common features are identified in each image and are used to model the relative three-dimensional position of the terrain. These DTMs are constructed without ground control and rely on the satellite-positioning model to locate the surface in space. The accuracy of the DTM is expected to be within several meters in the vertical dimension. The initial version of the Nepal mosaic was produced automatically and, therefore, has some small errors and edge artifacts that will be improved in the days ahead.

In partnership with the Polar Geospatial Center, the Ohio State group has embarked on a massive implementation of SETSM to derive high-resolution DTM mosaics of large areas, such as the Greenland Ice Sheet. SETSM is currently installed and running on high performance computing systems at the Ohio Supercomputer Center, the National Science Foundation's Extreme Science and Engineering Discovery Environment and the National Aeronautics and Space Administration. SETSM was developed as part of grant NNX10AN61G from the National Aeronautics and Space Administration.

Nepal disaster relief efforts to be aided by glacier researchers 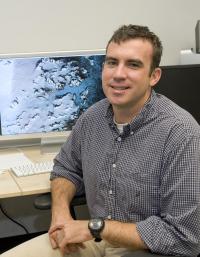