Freshwater dolphins use echolocation signals that are quieter, more low-pitched and more frequent than those used by their marine counterparts, according to research published March 27 in the open access journal PLOS ONE by Frants Havmand Jensen from Woods Hole Oceanographic Institution and colleagues.

All toothed whales use bio-sonar signals to navigate and find prey, but the echolocation signals of marine animals are better understood than those used by endangered river dolphins. In this study, the authors recorded the signals of two endangered freshwater dolphin species within the Sundarban mangrove forest, and found that they produced signals that were much quieter than signals produced by marine dolphins.

"Freshwater dolphins live in complex environments where circuitous river systems restrict how far away prey might be found using echolocation, especially when compared to marine dolphins echolocating in the open ocean " says Jensen.

In addition, the Ganges river dolphin produced sounds nearly an octave lower than signals of similar-sized marine dolphins. Lower-pitched sounds are likely to be less effective for echolocation, but this species has evolved unique bony crests in their foreheads that may help them focus their low-frequent biosonar signals more efficiently.

The study offers a valuable tool to help conservation biologists in their efforts to prevent a decline of these endangered species. Small acoustic recorders are being increasingly used for supplementing visual surveys, and the study describes how differences in the biosonar signals may be used to discriminate between species, estimate population sizes and identify areas crucial to the two freshwater dolphins.

PLEASE LINK TO THE SCIENTIFIC ARTICLE IN ONLINE VERSIONS OF YOUR REPORT (URL goes live after the embargo ends): http://dx.plos.org/10.1371/journal.pone.0059284

Disclaimer: This press release refers to upcoming articles in PLOS ONE. The releases have been provided by the article authors and/or journal staff. Any opinions expressed in these are the personal views of the contributors, and do not necessarily represent the views or policies of PLOS. PLOS expressly disclaims any and all warranties and liability in connection with the information found in the release and article and your use of such information.

About PLOS ONE: PLOS ONE is the first journal of primary research from all areas of science to employ a combination of peer review and post-publication rating and commenting, to maximize the impact of every report it publishes. PLOS ONE is published by the Public Library of Science (PLOS), the open-access publisher whose goal is to make the world's scientific and medical literature a public resource.

All works published in PLOS ONE are Open Access. Everything is immediately available—to read, download, redistribute, include in databases and otherwise use—without cost to anyone, anywhere, subject only to the condition that the original authors and source are properly attributed. For more information about PLOS ONE relevant to journalists, bloggers and press officers, including details of our press release process and our embargo policy, see the everyONE blog at http://everyone.plos.org/media. 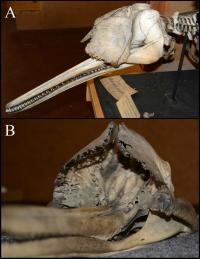 The Skull of a Ganges River Dolphin, Seen from A) the Side, and B) in Front of the Animal