Scientists have found the key to mosquitoes' stealth takeoffs: They barely push off when making a fast getaway, but instead rely on strong and rapid wing beats to quickly get aloft without anyone noticing.

The technique is in stark contrast to other insects, like flies, that push off first and then start beating their wings frantically, often tumbling uncontrollably in the process. That strong pushoff gives away their location, however, allowing us to swat them more easily than we can swat a mosquito.

"Mosquitoes take off mostly with their wings and push off with their legs very, very lightly, or maybe not at all," said Sofia Chang, a University of California, Berkeley graduate student who wrangled and fed malarial mosquitoes in order to study their takeoffs. "If they were to push off a lot more with their legs, they wouldn't have to produce as much lift with their wings. But if they lift just with their wings, you won't feel them coming off your skin."

Mosquitoes are able to make these stealthy takeoffs with an empty belly or one filled with a blood meal, which nearly doubles their weight, she said.

Working in the laboratory of Florian Muijres at Wageningen University in the Netherlands, Chang cycled through 600 mosquitoes as the team perfected its setup to film mosquito takeoffs with three high-speed cameras shooting at 125,000 frames per second. Chang initially fed them blood from her own arm before Wageningen University entomologist Jeoren Spitzen lent the project his entomological expertise and equipment to feed them artificially.

Her team used the mosquito species Anopheles coluzzii - which can carry malaria but was kept sterile during the experiment - in hopes of finding clues to flight maneuvers that could be used against them.

"These studies may also give tips about how to build very, very small robots. That is a field where miniaturization is a Holy Grail," Chang said.

She and her colleagues, including UC Berkeley integrative biology professors Robert Dudley and Mimi Koehl, were primarily interested in how insects alter their takeoffs when carrying extra weight, like a blood meal. The high-speed cameras captured stark silhouettes of the mosquitoes and their beating wings, which Muijres was able to turn into three-dimensional renderings of the wingbeats to help calculate lift and other aerodynamic forces. Of the many mosquitoes filmed, 63 videos were analyzed in the study: 32 of blood-laden mosquitoes, 31 unfed.

Chang, Muijres and Wouter van Veen were surprised to find that the mosquitoes began beating their wings about 30 milliseconds before liftoff using an extraordinarily high - and annoyingly whining - wing-beat frequency of about 600 beats per second. Other similarly sized insects beat their wings about 200 times per second.

They also discovered that the insects took advantage of their exceptionally long legs to extend them gently and push down slowly over the 30 milliseconds before takeoff, lifting free with barely a rebound. When Chang and Muijres calculated the wings' contribution to the takeoff, they were impressed that they contributed at least 60 percent of the force - and possibly all of the force - needed to lift a well-fed mosquito off the skin.

"Instead of going fast, they take their time, but they accelerate the entire time so that they reach a final velocity pretty much the same as fruit flies," Chang said. "That is something that might be unique to mosquitoes, and maybe even unique to blood feeders."

Fruit flies, the team found, exerted almost four times the force exerted by mosquitoes during takeoff. Coauthor Bart Biemans compared the anatomy of the mosquitoes' and fruit flies' leg muscles and found that the mosquitoes were missing the quick-kick muscles that present in the fruit flies, presumably "because [mosquitoes] need to produce a lower force at pushoff," Muijres said.

"These videos revealed that female mosquitoes carrying blood meals generate the extra lift they need to take off with such heavy loads by sweeping their wings across a greater distance during each wingbeat than do mosquitoes that are not carrying loads," Koehl noted.

The team next plans to look at mosquito landings, which are equally stealthy, and compare them to takeoffs and landings of other blood-sucking insects and non-blood-sucking mosquitoes, to determine if they exert a similarly light touch.

The work was supported by the National Science Foundation (DGE-0903711) and the Wageningen Institute of Animal Sciences. Chang and her colleagues from UC Berkeley and Wageningen University in the Netherlands will report their findings in a paper to be published Oct. 18 in the Journal of Experimental Biology.

A mosquito's secret weapon: a light touch and strong wings 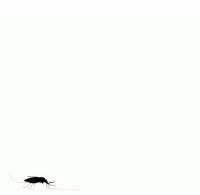