Papers delivered at three conferences in the US and Europe this summer report on new research at the University of Southern California Viterbi School of Engineering studying interactions of children with Autism Spectrum Disorders (ASD) with bubble-blowing robots.

The preliminary studies, by Professor Maja Matarić and PhD student David Feil-Seifer of the USC Interaction Laboratory, confirm what has been widely reported anecdotally: that ASD children in many cases interact more easily with mechanical devices than with humans.

Matarić and Feil-Seifer, both specialists in Socially Assisted Robotics (SAR), are now engaged in further research to confirm their findings, and to develop a robot "control architecture" which will tailor robot interactions to the specific needs of ASD children to help therapists treating their condition.

The initial study, reported in the June Conference on Interaction Design for Children with Special Needs in Chicago, tested whether interaction as opposed to simple passive observation was going on between ASD children and a colorful bubble-blowing wheeled robot.

The robot had two settings. In one, it carried on its rolling and bubble blowing on its own internal schedule, regardless of the behavior of the child. In the other, "when the child pushes a button, then the bubbles blow," in the words of the Chicago presentation.

While only four children were part of the initial study, Feil-Seifer and Matarić believe the work clearly demonstrates the ability of robots to actively engage with ASD children - "offer a doorway into their attention," Matarić says. A much more extensive follow-up with more subjects is already in progress, in collaboration with Los Angeles Childrens Hospital and the Autism Genetic Resource Exchange.

Two other presentations by Feil-Seifer and Matarić, at the 11th International Symposium on Experimental Robotics 2008 in Athens, Greece in July, 2008, and at the IEEE Proceedings of the International Workshop on Robot and Human Interactive Communication, discuss these results in more detail, particularly in regard to the "Behavior-Based Behavior Intervention Architecture" (B3IA) they have developed to make the robots flexible and useful tools help ASD children.

This architecture (the system, including robotic and non-robotic components, plus provisions for recording and analyzing the proceedings) is based on an ASD therapy format called DIR/Floortime, in which a therapist shares floor with various toys used to try to engage the child.

Matarić and Feil-Seifer, in collaboration with Dr. Marian Williams from Childrens Hospital Los Angeles and Shri Narayanan from Viterbi School's Department of Electrical Engineering, are replacing toys with robots, both the rolling robots with horns and bubble blowers used in the initial results, and humanoid robots capable of smiles and other expression.

Behind the scenes, the architecture also includes an overhead video view that analyzes, documents, and stores every interaction, and a control system for the therapist operator that allows for switching between scenarios for interaction with the child, to concentrate on what works, and change what works to make it work better -- while still retaining a standard record-keeping and monitoring system used in ASD therapy.

Matarić has for years been working in the field of socially assisted robots to help a variety of other user populations, including patients with Alzheimer's Disease and stroke victims receiving help in rehabilitation. She notes that ASD is now at "epidemic" proportions in the United States.

"I am gratified by these preliminary results," she said. "I believe that Socially Assistive Robotics has a part to play in helping families, both the affected children and their parents and siblings."

While not authors of the studies, Dr. Clara Lajonchere of Childrens Hospital of Los Angeles and Dr. Michele Kipke of the Autism Genetic Resource Exchange played key roles in the work and will be continuing to collaborate with the USC roboticists.

The research was funded by the USC Provost's Center for Interdisciplinary Research, the Okawa Foundation, and an NSF Computing Research Infrastructure Grant.

Copies of the conference presentations are available in PDF form here: 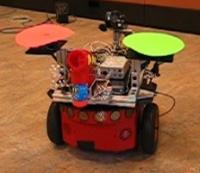