The discovery of numerous juvenile loggerhead turtles by a NOAA Fisheries research survey more than 200 miles off the Southern California Coast has revealed new details about a mysterious part of the endangered turtles' epic migration across the Pacific Ocean known as "the lost years."

"It's one of those great 'aha' moments in science," said Scott Benson, a marine ecologist with NOAA Fisheries' Southwest Fisheries Science Center. "We've always known they were out there somewhere, we just didn't know where."

North Pacific loggerhead turtles nest on beaches in Japan and young turtles then disappear into the North Pacific, with many reappearing later in a rich foraging area about 6,000 miles away off Baja California. How they get there and what they do along the way has remained largely a mystery, leading biologists to call the little-known chapter in loggerhead lives as "the lost years."

Late last year a NOAA Fisheries marine mammal survey crisscrossing waters off the West Coast happened onto a striking concentration of what biologists believe were lost-year loggerheads about 200 to 250 miles off Southern California. Within several days researchers spotted more than 70 confirmed or likely young loggerhead turtles less than 20 inches long, about the size of a laptop computer.

"It's like a missing piece of the puzzle we just finally got on the board," said Jeffrey Seminoff, a marine ecologist who leads the Marine Turtle Ecology and Assessment Program at the SWFSC in La Jolla, Calif. "This is the first time we've encountered an aggregation of these lost-year turtles far offshore of California. It looks like a very important area for turtles that have just crossed the Pacific."

How loggerheads cross the Pacific is important because they can get entangled and killed in certain kinds of fishing nets. Improved information about their route and timing can help NOAA Fisheries manage West Coast fisheries to better protect the endangered turtles.

"If we can predict where loggerheads are going to be and when, we can tell where it's safer to fish," Seminoff said. "This is a big step forward in terms of being able to do that."

Biologists have long known that loggerheads are associated with warm ocean water and sightings off California are not unusual, albeit still rare, when offshore waters turn warm, as they have in the last several months.

One theory was that turtles feeding off southern Baja ventured hundreds of miles north toward California during warm conditions.

But the mass of young turtles spotted by the NOAA Fisheries survey appear to have been headed in the opposite direction. They were much smaller and therefore younger than turtles commonly seen off Baja, and were farther offshore than typical loggerhead sightings. That indicates they were still actively migrating south toward Mexico, following currents that carry them from Japan like a giant conveyor belt across the North Pacific and then south along the West Coast.

"Our hypothesis has shifted now," Seminoff said. "These turtles off California appear to be using it as a transition area on their way to Baja. The pieces fit. They really fit."

"These turtles were right on the edges of these features," Seminoff said. "We now believe these aggregations of turtles probably occur every year when and where the warm eddy features appear, but perhaps only rarely in California waters. Either way, we just have never such an aggregation before. This is one of the best discoveries we've had in years in terms of understanding the lives of these turtles."

Satellite tracking of loggerhead turtles in the Atlantic Ocean recently revealed that juvenile turtles hatched on the beaches of Florida venture thousands of miles east into the open ocean, spending their "lost years" feeding amid floating sargasso beds before returning to nest. NOAA Fisheries scientists are now planning similar tracking of the newfound Pacific loggerhead turtles off California to more completely chart their migration route.

"It's a similar life history pattern," Seminoff said. "We're full steam ahead to find out more." 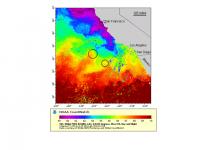