Common starfish cannot survive amplified marine heatwaves projected at the end of the century and experience lasting negative effects from current heatwaves, according to new research being presented on at the British Ecological Society's Festival of Ecology.

In experiments simulating extreme ocean conditions, researchers at GEOMAR Helmholtz-Centre for Ocean Research Kiel found that heatwaves of +8 °C, projected by 2100, killed 100% of starfish tested. Heatwaves of this magnitude are only 1 degree warmer than heatwaves recorded in 2018 in the Kiel Fjord, where the research took place.

They also found that present day heatwaves of +5 °C - experienced in summer months - negatively affected starfish feeding. If the heatwave was short, star fish were able to recover, but during extended heatwaves, starfish were unable to recover and lost weight.

Fabian Wolf, who is presenting the research, said: "Our findings showcase that extreme environmental conditions such as marine heatwaves may temporally exceed a species tolerance limit with potential implications for populations at these shallow coastal depths."

The researchers also tested the combined effects of other extreme events. In each treatment, heatwaves were followed by a simulated hypoxic upwelling event, a phenomenon where coastal water becomes colder, more saline, more acidic and higher in CO2.

Fabian explains: "During spring and summer, plankton blooms (which often benefit from global warming) sink to the sea's bottom as dead material. Here, bacteria degrade this material, consuming oxygen and producing carbon dioxide. In coastal areas, particularly strong and persistent winds may push the surface water away from land, while deep (acidified and hypoxic water) is shoaled up the shores."

The researchers found that starfish that didn't experience a heatwave were more affected by a subsequent hypoxic upwelling event, with a significant reduction in their activity. They propose that the first stressor, the heatwave, could provide resilience for the starfish that enables them to better cope with the second, the upwelling event.

"Our results emphasise that it is crucial to study different stressors in combination and not isolation as stressors naturally occur in succession, meaning that they are never independent of each other." said Fabian.

Common starfish, which are found widely throughout the North-East Atlantic and are a familiar fixture of UK rockpools, are known as a keystone species, characterised by their high importance in the ecosystem. As a predator, common starfish prey on blue mussels and control their population size.

"If the common starfish is lost from a relatively species-poor system, blue mussels may grow uncontrolled and form monocultures. Other habitat-forming species like seagrass and seaweed could be lost in the process of blue mussel propagation." said Fabian.

"It must also be considered that other, non-native species may come and fill these gaps, as can be seen by several recently introduced crab species to the Western Baltic Sea that have blue mussels as their preferred prey."

Even if common starfish are not killed outright by heatwaves, the researcher's findings that they lose weight in extended heatwaves could alter the prey they're able to eat. This is because starfish select prey based on its size comparative to them. If smaller starfish are only able to feed on juvenile blue mussels, populations might get older, impacting the ecosystem.

The researchers ran the experiments in a state-of-the-art facility consisting of large experimental tanks, the Kiel Indoor Benthocosms at GEOMAR Helmholtz-Centre for Ocean Research Kiel. These specialist tanks allowed the researchers to apply upwelling conditions and heatwaves of varying intensity and duration over 63 days of total experimental time.

To measure the effects these conditions had on the starfish, the researchers recorded their feeding rate (on blue mussels), their activity (time it took them the right themselves when tipped onto their backs) and weight change.

The researchers acknowledge the limitations in drawing conclusions on whole ecosystem impacts. Fabian said: "The impacts of marine heatwaves and hypoxic upwelling events on the blue mussel prey were neglected from the present study, limiting the conclusions to a top-down effect.

"Yet, in mussel-dominated ecosystems prey populations will be highly controlled by starfish and any implication for their performance will translate into ecosystem-level impacts."

In addition, this study does not factor in species behaviour in the natural environment. Starfish may avoid heated surface waters by moving to deeper water. But these waters may be hypoxic during summer months, shrinking their viable habitat.

The researchers hope that future work will help to reveal the underlying physical mechanisms behind their findings, such as the production of special proteins which help starfish deal with heat stress.

They also want to explore the impacts of extreme marine events on other species in coastal ecosystems. Fabian said: "Elucidating the overall impact of ocean change on mussel reefs may need to include all other predators in the system, and their responses to these simulated events."

Fabian Wolf will present the work the Festival of Ecology and his talk is available on demand during the conference. This work is unpublished and has not been through the peer-review process as of yet. This online conference will bring together 1,400 ecologists from more than 50 countries to discuss the most recent breakthroughs in ecology. 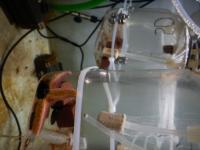