Not long ago, the azure waters of the Caribbean contained healthy and pristine coral reef environments dominated by the reef-building corals that provide home to one-third of the biodiversity in the region.

But the Caribbean reefs of today pale in comparison to those that existed even just a generation ago. Since researchers began intensively studying these reefs in the 1970s, about one half of Caribbean corals have died. The iconic elkhorn and staghorn corals that once dominated Caribbean reefs have been hardest hit, with only 20% of their populations remaining today.

Although researchers believe climate change, fishing and pollution are to blame, the lack of baseline data prior to the 1970s has made it hard to determine the precise reasons for these coral die offs. ASU researcher Katie Cramer wanted to document when corals first began dying to better understand the root causes of coral loss.

Now, in a new paper in Science Advances, Cramer has combined fossil data, historical records, and underwater survey data to reconstruct the abundance of staghorn and elkhorn corals over the past 125,000 years. She finds that these corals first began declining in the 1950s and 1960s, earlier than previously thought. This timing is decades before climate change impacts, indicating that local human impacts like fishing and land-clearing set the stage for the widespread coral declines that are now accelerating in response to warming oceans.

"I am interested in going back to the scene of the crime when humans first began to significantly impact coral reefs centuries ago, to understand when, why and how much reefs have been altered by humans," said Katie Cramer, an assistant research professor at the Julie Ann Wrigley Global Institute of Sustainability at Arizona State University and an Ocean Science Fellow at the Center for Oceans at Conservation International.

The earlier, local roots of declines of elkhorn and staghorn corals in the 1950s and 1960s highlight the urgency of mitigating local human impacts on reefs to allow these corals to recover. "In an era where coral reefs are being hit with multiple human stressors at the same time, we need to resolve why and how much coral reefs have changed over human history to inform our responses to the current reef crisis."

"Recent studies are showing that reefs are better able to cope with climate change impacts when they are not also stressed from overfishing and land-based runoff. So let's get a handle on these tractable problems now to give reefs a better chance of weathering the current climate crisis," said Cramer. 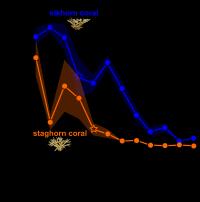