The date 12-12-12 may be numerically significant, but for the residents of American Samoa and Fiji in the South Pacific Ocean, it means a newborn tropical storm named Evan is causing problems. NASA's Aqua satellite and NOAA's GOES-15 satellite both captured imagery of the newborn storm's cloud cover.

Tropical Storm Evan caused regional warnings to be posted on Dec. 12. In American Samoa, a gale warning and storm watch are in effect for Tutuila, Aunuu, Manua and Swains Island.

The Atmospheric Infrared Sounder (AIRS) instrument aboard NASA's Aqua satellite captured an infrared image of newborn Tropical Storm Evan over American Samoa on Dec. 12, 2012 at 12:47 UTC (7:47 a.m. EST). The strongest thunderstorms with cloud top temperatures exceeding -63F (-52C) appeared around the center of circulation and in a band of thunderstorms north and east of the center. Cloud top temperatures that cold indicate the highest, strongest storms with the heaviest rainfall within the tropical cyclone. 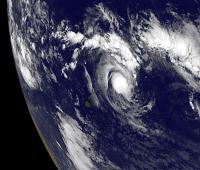