In the typical food web that most of us learned in school, the sun is the ultimate source of energy. Plants use energy from the sun to produce their own food via photosynthesis. Animals eat those plants or other animals. But in marine environments, some organisms instead get their energy from chemosynthetic bacteria, which produce their own food from simple chemicals in the environment. Now, researchers reporting in Current Biology on December 8 have found that chemosynthesis plays an unexpectedly essential role even in shallow waters, supporting populations of one of the most lucrative fishery species in Central America: the Caribbean spiny lobster.

The researchers show that lucinid clams, which get their food from chemosynthetic bacteria living in their gills, account for 20 percent of the lobster's diet. The findings offer the first empirical evidence that chemosynthetic primary production contributes to the productivity of an important commercial fishery, generating more than US$450 million per year.

"We found that Caribbean spiny lobsters are getting a large proportion of their food from one particular clam species, the tiger lucine, which are unusual because they make their own food with the help of chemosynthetic bacteria living in their gills," says Nicholas Higgs (@BahaNick) from the University of Plymouth in the United Kingdom. "This chemosynthetic food source represents an alternative food pathway to the traditional photosynthesis-based food chain. By tapping into this food source, the lobsters are taking advantage of extra food that few other predators seem to be able to access, which helps explain the high productivity of the lobster fishery."

Chemosynthesis had been thought to be important primarily in deep-sea environments where the sun doesn't shine. More recently, it became clear that lucinid clams are also abundant in shallow seagrass ecosystems. But their role in the larger food web wasn't clear.

In the new study, Higgs and colleagues monitored spiny lobsters at ten locations across the Great Bahama Bank, an area highly frequented by lobster fisherman. On multiple occasions, they caught spiny lobsters in action, munching on lucinid clams.

Stable isotope analyses of the lobsters' tissues indicate that the animals obtain about one-fifth of their diet from the clams. In some populations, that figure almost doubled. The discovery shows that a major portion of the lobster's diet consists of clams that get their food from chemical energy.

"Although chemosynthetic organisms were known to inhabit certain shallow ecosystems like seagrass beds and mangrove swamps, they were thought to be 'dead ends' in the food chain or pretty minor at best," Higgs says. "It shouldn't have been a surprise because they can be some of the most abundant animals in seagrass beds, but they often live deep down in the sediment so people thought that they were generally inaccessible. It was pretty surprising to find that they help support a major economically important fishery species."

The discovery helps to explain the high productivity of the Caribbean spiny lobster fishery and the seagrass environments they live in. It shows that seagrass habitats and chemosynthetic productivity should be considered in conservation and environmental management going forward. The researchers estimate that chemosynthesis is worth over US$17 million in lobster production to the Bahamas fishery alone.

It might turn out that chemosynthetic organisms are an important source of food to spiny lobster species around the world, a possibility that Higgs hopes now to explore. He is also curious to learn what other animals eat the clams.

"We are just beginning to scratch the surface of understanding just how important these alternative forms of food production are in marine and freshwater ecosystems," Higgs says.

This work was funded by the British Ecological Society and the Natural Environment Research Council.

Valuable Caribbean spiny lobsters get their food from an unexpected source 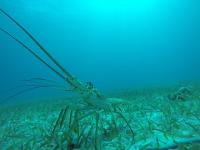 Caribbean Spiny Lobster in the Bahamas 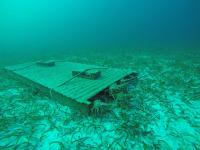