HOUSTON, April 26, 2008—Patients in therapy to overcome addictions have a new arena to test their coping skills—the virtual world. A new study by University of Houston Associate Professor Patrick Bordnick found that a virtual reality (VR) environment can provide the climate necessary to spark an alcohol craving so that patients can practice how to say “no” in a realistic and safe setting.

“As a therapist, I can tell you to pretend my office is a bar, and I can ask you to close your eyes and imagine the environment, but you’ll know that it’s not real,” Bordnick said. “In this virtual environment you are at a bar or at a party or in a real-life situation. What we found was that participants had real-life responses.”

Bordnick, of the UH Graduate College of Social Work, investigates VR as a tool for assessing and treating addictions. He studied 40 alcohol-dependent people who were not receiving treatment (32 men and eight women). Wearing a VR helmet, each was guided through 18 minutes of virtual social environments that included drinking. The participant’s drink of choice was included in each scene. Using a game pad, each rated his or her cravings and attention to the alcohol details in each room. Each then was interviewed following the experience.

“What we found was that the VR environments were real enough that their cravings were intensified. So, now we can develop coping skills, practice them in those very realistic environments until those skills are working tools for them to use in real life,” Bordnick said.

His VR environments, developed with a company called Virtually Better, feature different scenarios that an addict may find challenging: a bar with imbibing patrons, a house party with guests drinking and smoking, a convenient store with cigarettes and alcoholic beverages within reach, a designated smoking section outside of a building or a room with an arguing couple. The environments use actors in each scene as opposed to computer-generated characters. In addition, the study added another layer of realism. A device sprayed the air with scents the participant may encounter in the various scenarios—cigarette smoke, alcoholic beverages, pizza or aromas associated with the outdoors.

“This study shows us the value of using virtual reality as a tool for assessing and treating addictions. Future studies should explore the importance of environmental settings and other cues on cravings and relapse,” Bordnick said.

His study is available online in the journal Addictive Behaviors.

Bordnick also has VR environments to help soldiers from Iraq, those with a fear of flying, fear of public speaking and fear of heights.

For more information on the UH Graduate College of Social Work, visit www.sw.uh.edu/main/home.php. 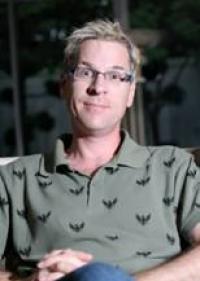