According to a recent study, one in four women with breast cancer who opt for a breast-saving lumpectomy will need a second surgery - increasing both costs and the risk of complications.

Why is a second surgery so common? Currently the only way surgeons can confirm during surgery that there are no cancer cells in the “margin” – the tissue surrounding the removed tumor – is by performing a frozen section, which uses liquid nitrogen to freeze the excised tissues before the tissue is sectioned into thin slices and stained for pathologists to examine in the lab. This procedure is often performed during surgery to evaluate the tumor margin. Surgeons remove more tissue if a positive margin is identified. The excised tissue is then sent for a thorough histopathological evaluation. However, the frozen section can miss the tumor margin on the tissue surface - and often does – and the histopathology results from the lab are not available for several days.

What if surgeons had a more accurate way to find out – in the operating room, in real-time – whether the margins were free of cancer cells?

Chao Zhou, assistant professor of electrical engineering at Lehigh University and his Lehigh collaborator Sharon Xiaolei Huang, associate professor of computer science and engineering, are working to make that vision a reality. They have created a computer-aided diagnostic technique that marries cutting-edge imaging technology with the latest advances in artificial intelligence to detect in real-time the difference between cancerous and benign cells.

“The idea is that one day, if this technique could be used during surgery, it could complement the histopathology, potentially reducing the need for a second breast cancer surgery,” said Zhou.

A feasibility study– published in an article in Medical Image Analysis – has yielded promising results: their technique achieved a classification accuracy of over 90%. This means the system correctly identified benign vs. cancerous cells over 90% of the time.

Zhou’s and Huang’s method is compelling for its relatively new application of an imaging technique called optical coherence microscopy (OCM) as a breast cancer diagnostic. It is also notable for its innovative approach to training a computer system to recognize texture patterns.

Features extracted from the OCM images are used to train the computer system to automatically identify different tissue types.

“The process takes a large number of images, and labels the types of tissue in the sample,” says Huang. “For every pixel in the image, we know whether it is fat, carcinoma or another cell type. In addition, we extract thousands of different features that can be present in the image, such as texture, color or local contrast, and we use a machine learning algorithm to select which features are the most discriminating.”

After examining multiple types of texture features, Huang and Zhou determined that Local Binary Pattern (LBP) features—visual descriptors that compares the intensity of a center pixel with those of its neighbors—worked best for classifying tissues imaged by OCM.

From the article: “Our experiments show that by integrating a selected set of LBP and the two new variant (ALBP and BLBP) features at multiple scales, the classification accuracy increased from 81.7% (using LBP features alone) to 93.8% using a neural network classifier.”

"In addition, we used these multi-scale and integrated image features to achieve high sensitivity - 100% - and specificity - 85.2% - for cancer detection using the OCM images,” adds Huang.

Zhou, whose work focuses on improving biomedical imaging techniques, is a pioneer in the novel use of OCM, a non-invasive imaging method that can provide 3D, high-reso

ution images of biological tissue at the cellular level. OCM images come very close to what can be detected through histopathology.

Huang’s role, as an expert in training computers to recognize visual images, is to identify the best way to analyze those images to differentiate between benign and cancerous tissue.

The combination of powerful imaging and powerful image analysis that makes up their technique could be a significant step toward enabling real-time diagnosis of breast cancer tissue in the operating room. The researchers hope it may one day lead to minimizing the need for a second surgery, reducing costs and lowering the risk of complications for patients. 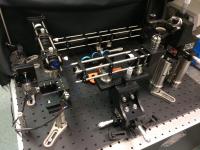