WASHINGTON, D.C., NOVEMBER 7, 2018 -- Beatboxing is a musical art form in which performers use their vocal tract to create percussive sounds. Sometimes individual beatboxers perform as a part of an ensemble, using their vocal tracts to provide beats for other musicians; other times, beatboxers perform alone, where they might sing and beatbox simultaneously or simply make sounds without singing.

A team of researchers is using real-time MRI to study the production of beatboxing sounds. Timothy Greer, a doctoral candidate at the University of Southern California, will describe their work showing how real-time MRI can characterize different beatboxing styles and how video signal processing can demystify the mechanics of artistic style. Greer will present the study at the Acoustical Society of America's 176th Meeting, held in conjunction with the Canadian Acoustical Association's 2018 Acoustics Week in Canada, Nov. 5-9 at the Victoria Conference Centre in Victoria, Canada.

"Beatboxers may learn something different in preparing to make a sound than they do when they're talking," said Greer. "Using real-time MRI allows us to investigate the difference in the production of music and language and to see how the mind parses these different modalities."

Previous research in this field usually consists of a case study of one beatboxer and suggests that beatboxers can only produce sounds that exist within the world's known languages. The new study looks at several beatboxers of different ages and genders, and with different native languages.

"We found that beatboxers can create sounds that are not seen in any language. They have an acrobatic ability to put together all these different sounds," said Greer. "They can hear a sound like a snare drum and they can figure out what they need to do with their mouth to re-create it."

One of the main challenges for the researchers has been developing the algorithms they use to quantify the movement of the beatboxer's vocal tract. A linguist labels all the various parts of the body involved in sound production such as the tongue and the roof of the mouth, and the algorithm tracks the images of these various parts as they move during the production of sound.

"The vocal tract is amazing but it's also incredibly complex. We need to keep creating better computer algorithms to understand how it all works together," said Greer.

The Canadian Acoustical Association (CAA) is a professional, interdisciplinary organization that fosters communication among people working in all areas of acoustics in Canada; promotes the growth and practical application of knowledge in acoustics; encourages education, research, protection of the environment, and employment in acoustics; and is an umbrella organization through which general issues in education, employment and research can be addressed at a national and multidisciplinary level. For more information about ASA, visit http://caa-aca.ca. 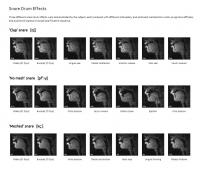