Astronomers have looked nine billion years into the past to find evidence that galaxy mergers in the early universe could shut down star formation and affect galaxy growth.

New research led by Durham University, UK, the French Alternative Energies and Atomic Energy Commission (CEA)-Saclay and the University of Paris-Saclay, shows that a huge amount of star-forming gas was ejected into the intergalactic medium by the coming together of two galaxies.

The researchers say that this event, together with a large amount of star formation in the nuclear regions of the galaxy, would eventually deprive the merged galaxy - called ID2299 - of fuel for new stars. This would stop star formation for several hundred million years, effectively halting the galaxy's development.

Astronomers observe many massive, dead galaxies containing very old stars in the nearby Universe and don't exactly know how these galaxies have been formed.

Simulations suggest that winds generated by active black holes as they feed, or those created by intense star formation, are responsible for such deaths by expelling the gas from galaxies.

Now the Durham-led study offers galaxy mergers as another way of shutting down star formation and altering galaxy growth.

Observational features of winds and "tidal tails" caused by the gravitational interaction between galaxies in such mergers can be very similar, so the researchers suggest that some past results where galactic winds have been seen as the cause of halting star formation might need to be re-evaluated.

The findings are published in the journal Nature Astronomy.

Lead author Dr Annagrazia Puglisi, in Durham University's Centre for Extragalactic Astronomy, said: "We don't yet know what the exact processes are behind the switching off of star formation in massive galaxies.

"Feedback driven winds from star formation or active black holes are thought to be the main responsible for expelling the gas and quenching the growth of massive galaxies.

"Our research provides compelling evidence that the gas being flung from ID2299 is likely to have been tidally ejected because of the merger between two gas rich spiral galaxies. The gravitational interaction between two galaxies can thus provide sufficient angular momentum to kick out part of the gas into the galaxy surroundings.

"This suggests that mergers are also capable of altering the future evolution of a galaxy by limiting its ability to form stars over millions of years and deserve more investigation when thinking about the factors that limit galaxy growth."

Due to the amount of time it takes the light from ID2299 to reach Earth the researchers were able to see the galaxy as it would have appeared nine billion years ago when it was in the late stages of its merger.

This is a time when the universe was only 4.5 billion years old and was in its most active, "young adult" phase if compared to a human life.

Using the European Southern Observatory's Atacama Large Millimeter Array (ALMA) telescope, in northern Chile, the researchers saw it was ejecting about half of its total gas reservoir into the galaxy surroundings.

Researchers were able to rule out star formation and the galaxy's active black hole as the reason for this ejection by comparing their measurements to previous studies and simulations and by measuring the physical properties of the escaped gas.

The rate at which the gas is being expelled from ID2299 is too high to have been caused by the energy created by a black hole or starburst as seen in previous studies, while simulations suggest that no black holes can kick out as much cold gas from a galaxy.

The excitation of the escaped gas is also not compatible with a wind generated by a black hole or the birth of new stars.

"It is probably caught during an important physical phase for galaxy evolution that occurs within a relatively short time window. We had to look at over 100 galaxies with ALMA to find it."

Fellow co-author Dr Jeremy Fensch, of the Centre de Recherche Astrophysique de Lyon, added: "Studying this single case unveiled the possibility that this type of event might not be unusual at all and that many galaxies suffered from this 'gravitational gas removal', including misinterpreted past observations.

"This might have huge consequences on our understanding of what actually shapes the evolution of galaxies."

The researchers now hope to obtain higher resolution images of ID2299 and other distant galaxy mergers and carry out computer simulations to further understand the effect galaxy mergers have on the life cycle of galaxies.

The research was funded by the Science and Technology Facilities Council, part of UK Research and Innovation, Region Île-de-France, and the CEA-Enhanced Eurotalents program, co-funded by the FP7 Marie-Sk?odowska-Curie COFUND program, Comunidad de Madrid, Spanish Ministry of Science, Innovation and Universities (MICIU), and co-financed by FEDER (European Regional Development Funds). 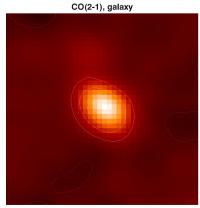