New Haven, Conn. - Researchers have discovered the 425-million-year-old fossil remains of a new species of parasite, still attached to the host animal it invaded long ago.

The new species is a type of tongue worm, an arthropod that has a worm-like body, a head, and two pairs of limbs. Its modern-day relatives live within the respiratory system of host animals, sometimes even humans, after being ingested via an intermediate host such as a fish.

An international team of researchers found several specimens of the new species, named Invavita piratica (meaning "ancient intruder" and "piracy"), in 425-million-year-old rocks in Herefordshire, England. The specimens were "exceptionally well-preserved," according to the researchers, and range in size from about 1 to 4 millimeters long.

A study describing the ancient parasite appears in the May 21 edition of the journal Current Biology.

"This is the most important fossil evidence yet discovered of the origins of this type of parasitism," said Yale University paleontologist Derek Briggs, co-author of the study. Briggs is the G. Evelyn Hutchinson Professor of Geology and Geophysics at Yale and curator of invertebrate paleontology at the Yale Peabody Museum of Natural History.

This is the first fossil tongue worm species to be found associated with its host. In this case, the host is an ostracod -- a group of micro-arthropods with two shells that are joined at a hinge.

"This discovery is important not only because examples of parasites are exceptionally rare in the fossil record, but also because the possible host of fossil tongue worms -- and the origin of the lifestyle of tongue worms -- has been the subject of much debate," said paleontologist David Siveter of the University of Leicester, the study's lead author.

Some of the new specimens were found inside the shell of the host animal, near its eggs; other specimens were attached to the external surface of the host's shell -- a unique position for any fossil or living tongue worm.

The technical name for tongue worms is pentastomids. Today there are about 140 species, nearly all of which are parasitic on vertebrate animals, particularly reptiles, but also humans.

Requiem for an ancient tongue worm 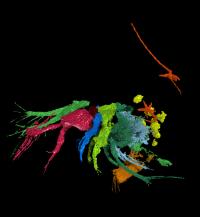