Think back to health class and picture a sperm. It's got a smooth rounded head, with a long skinny tail at the end, right? As it turns out, the sperm from different species of animals have different shapes--and, as a new study in the Journal of Mammalogy shows, those shapes can be used to tell apart closely related species.

"In this paper, we looked at the shape of sperm in 18 different species of rodents, and we found that sperm shape is a characteristic that can be used to discriminate between closely related mammal species," says Noé de la Sancha, co-first author of the paper and a researcher at the Field Museum in Chicago. "This is the biggest study for this kind of rodent, this is brand spankin' new."

To come to their conclusions, de la Sancha and his fellow first author, Luis Rossi of the Universidad de Buenos Aires, had to look at a lot of sperm. They analyzed upwards of 50 individual spermatozoa from 58 individual South American rodents from the subfamily Sigmodontinae of the family Cricetidae, and for that, they needed a lot of pickled mouse testicles.

"I trapped a lot of these mice when I was working on my dissertation. When we prepared the male specimens, we put the testicles in formalin, and that preserved the sperm," says de la Sancha. "A lot of people throw the testes away--they're an underutilized resource."

Rossi and de la Sancha were then able to study the preserved sperm, taking measurements and observing differences in shape and size. They discovered that the sperm varied quite a bit, even in very closely related species. Some had hooked heads, like the top of a soft-serve ice cream cone, while others were rounded and smooth, and their tails were different sizes. The most variation was found in the sperms' mid-sections, which are packed with energy-producing mitochondria that power the sperm to swim.

It's not exactly clear why the different species have such differently-shaped sperm, but co-author Rossi hypothesizes that the different sperm shapes must be conferring some sort of advantage to the rodents. "Sperm competition is a form of post-coital sexual selection that influences the evolution of the semen characteristics of animals," explains Rossi. "This work represents an important step in our understanding of how evolutionary advances can maximize reproductive success. Looking at the sperm also lets us see if the shape can be traced back to the evolutionary relationships between species--what biologists call a phylogenetic signal."

The research begs the question, "Surely there's an easier way to tell these animals apart than by examining their sperm?" Not necessarily, says de la Sancha. "Many of these species are cryptic--they look nearly identical, even to experts," he explains. "And using DNA to tell species apart isn't perfect, either. You can tell by DNA that two specimens are different from each other, but how different is different enough to be a separate species? Is it just geographic variation? For many closely related species, it's not that straightforward."

But while two rodents' DNA might be very close and they might look the same, their sperm might have completely different shapes--a dead giveaway that they belong to separate species. "This adds another level of evidence for telling species apart, just like the shape of their teeth or the length of their tails," says de la Sancha.

And telling these rodents apart could have important implications for medicine and conservation, says de la Sancha. "Some of these species of mice are hosts of specific diseases," he explains. "The more accurately we can determine which specimens belong to which species, the better we can fight the spread of those diseases."

Distinguishing between species is also crucial for researchers working to protect those species. "We still don't know how many species are on the planet right now, and we're in the sixth mass extinction. We're losing species faster than we can identify new ones," says de la Sancha. "This study could make us better able to understand bigger patterns of biodiversity. Using sperm to tell rodents apart is adding one more tool to the toolbox." 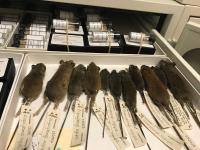