"Since 1996 more than a billion acres have been planted with biotech crops in the U.S.," said Michelle Marvier of Santa Clara University in Calif. "We don't really know what are the pros and cons of this important new agricultural technology."

"People on both sides of the debate about genetically engineered crops have been making a lot of claims," said Marvier, an associate professor of biology and environmental studies. "One side has been saying that biotech crops reduce insecticide use, reduce tillage and therefore the erosion of top soil. People on the other side say that biotech crops could hurt native species."

The article, Harvesting Data from Genetically Engineered Crops, has a map showing the distribution of crop fields in Arizona township by township.

Tabashnik, UA head and professor of entomology, said, "Putting Arizona's biotech cotton on the map has allowed us to be a leader in assessing the environmental impacts of biotech crops."

In Arizona, a unique collaboration between researchers and farmers has made detailed crop data available to researchers at The University of Arizona.

Tabashnik said, "It's a win-win situation. We analyze data they collect, so they can control pests better and make more money. It helps us obtain fundamental information about what's going on in the field that we could never get without them."

One of the UA's analyses showed that adoption of biotech cotton in Arizona helped to reduce insecticide use while sustaining yields.

Carrière, a UA professor of entomology who has done many of the analyses, said, "You have to protect the privacy of the farmers. We've done it in Arizona, so why not do it across the country?"

To start examining those questions in other parts of the U.S., the team of scientists call for the government to make available data it is already collecting.

At the present time, the team writes, the U.S. Department of Agriculture collects data at the scale of individual farms, but the data are only available to researchers at the scale of entire states. Answering key questions about the environmental impacts of genetically engineered crops requires finer spatial resolution.

"The analyses could be about quality of water, quality of soil, non-target effects, regional population density of pests and economic aspects such as yield improvement," said Carrière. "The findings could be useful to a wide range of people."

The U.S. Department of Agriculture’s National Agricultural Statistical Service annually collects data documenting acreage planted to various crops in all 50 states, the researchers write in their paper. In addition, the NASS annually interviews more than 125,000 farmers about their land use and the acreage planted in various biotech crops.

Tabashnik said, "We're already spending the money to have these data collected. Let's make them available in the right format for researchers to use. It would be a relatively inexpensive additional step with enormous scientific and public benefit." 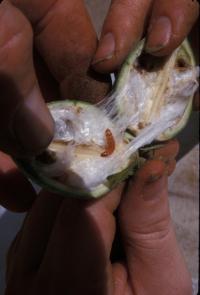 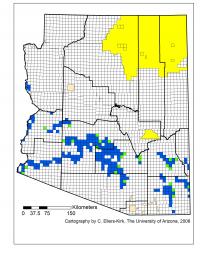 Map of Arizona Agricultural Fields in 2005