Scientists discovered a new enigmatic species of ant coming from the Philippines. Cardiocondyla pirata or the pirate ant engages the imagination with a bizarre pigmentation pattern that has no equivalent worldwide. The female castes in the colonies of these species can be recognized by a distinctive dark stripe across the eyes that resembles a pirate eye patch, which inspired the authors to choose the name of the species. The study was published in the open access journal Zookeys.

"On a collection trip to the Philippines we looked for different species of the genus Cardiocondyla that is known for its astonishing morphological and behavioral diversity of male ants. Beside already know species we also detected a until then undiscovered species in the cleavage of big stones in a shady streambed. Due to the darkness of the rainforest and the translucent body parts of the tiny ants they were nearly invisible. Under bright light and a magnifier we detected the nice stripe across the eyes and therefore always referred to these species as "the pirates.", comments Sabine Frohschammer, PhD student Universität Regensburg.

What remains a mystery for scientists is the adaptive significance of the extraordinary pigmentation pattern. The poor vision and the fact that these ants mate in the dark exclude one of the most obvious hypotheses that the dark patch serve as a sign for sexual differentiation and thus a cue for recognition during mating.

A possible guess about the function of this bizarre pirate-like coloration pattern is that it serves as a tool to distract and confuse the enemy. The combination of the dark stripes together with a rather translucent body when living could leave the impression in predators that the anterior and posterior body parts are in fact two separate objects.

However even if this hypothesis is true the enigmatic pigmentation pattern of Cardiocondyla pirata will continue to engage the minds of scientists. "Remains the question: Which predator with a high-performance visual system could consume these tiny ants?",comment the authors of the study.

The pirate ant: A new species from the Philippines with a bizarre pigmentation pattern 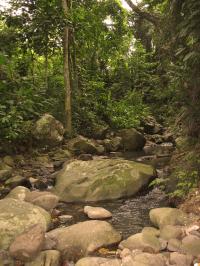