SALT LAKE CITY -- A truck-mounted radar dish often used to chase Midwest tornadoes is getting a workout in Utah this month as University of Utah meteorologists use it to get an unprecedented look inside snow and rain storms over the Salt Lake Valley and the surrounding Wasatch and Oquirrh mountains.

"For students who love snow, it's every bit as thrilling as chasing tornadoes," says avid skier and atmospheric sciences Professor Jim Steenburgh. "That's why we call it storm chasing, Utah style."

The Storm Chasing Utah Style Study, SCHUSS – the term for a straight, downhill ski run – makes use of a Doppler on Wheels (DOW) radar truck operated by the Center for Severe Weather Research in Boulder, Colo., for the National Science Foundation.

"We have never been able to examine the 'guts' of Wasatch winter storms like we can with the Doppler on Wheels radar that is presently here in Salt Lake City," Steenburgh wrote recently in his Wasatch Weather Weenies blog. "In particular, we can take a meteorological CAT scan of winter storms to see their inner workings."

The Doppler on Wheels truck arrived in Salt Lake City on Oct. 21 and will be here until Nov. 21. During Oct. 22-23, a dozen University of Utah graduate students were trained to drive the truck and use the 6-foot-diameter radar dish transmitter and receiver.

The portable "X-band polarimetric Doppler radar" system was developed originally for studying tornadoes, and Steenburgh says it "measured the strongest wind ever recorded during the Moore, Okla., tornado" in 1999 – clocked at 318 mph

The truck's radar emits and receives radio waves horizontally and vertically. This provides more information than radars used by the National Weather Service, which plans to upgrade to the new radars in the next few years.

Steenburgh says the DOW radar can distinguish the size and shape of snowflakes and raindrops in a storm, can collect data on lower-elevation valley locations and can park closer to storms and thus get more detail.

"Despite improvements in weather forecasting over the past few decades, winter storms in Utah remain a challenge to predict," Steenburgh says. "Unlike radars used for weather forecasting, the Doppler on Wheels can be placed anywhere during a storm, enabling us to peer into storms and uncover their secrets. The information we collect can be used to better understand lake-effect, mountain and other Utah storms, and improve computer models used for weather prediction."

When the truck is used to chase tornadoes, "you are constantly driving," he says. "We don't move it around a lot. We let the storm come to us. … But in a long-lived, multiday storm, we would probably move it as the storm characteristics change."

Steenburgh hopes the truck's radar can be used to study eight to 10 storms during its time in Utah, although there haven't been many so far. As of Nov. 10, the radar truck has been deployed for five weather events:

"We got an unprecedented data set on the lake effect snow that fell Saturday morning," Steenburgh says. "It was phenomenal."

Steenburgh's enthusiasm for bad weather comes across in his blog. During the Nov. 1 storm, he told his students: "Just ooh and ahh as you see precipitation bands moving across the mountains." And when the snow started flying Nov. 4, he wrote: "We now have data flowing in from this storm. So psyched."

A video showing radar images of a Nov. 5 lake-effect snowband (orange) moving from the southeastern Great Salt Lake to the Wasatch Range (red) may be downloaded from: http://www.inscc.utah.edu/~steenburgh/SCHUSS-IMAGES/dowlakebandloop.mov

A video showing the Nov. 5 lake-effect snowband (orange), first in birds-eye-view, and then moving to a horizontal view from the northeast, maybe downloaded from: http://www.inscc.utah.edu/~steenburgh/SCHUSS-IMAGES/dowlakebandinvertical.mov

Additional photos related to this news release may be downloaded from: http://www.inscc.utah.edu/~alcott/dow/dow.html

Website of the Center for Severe Weather Research: http://www.cswr.org/ 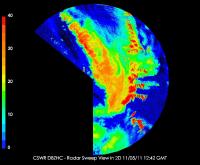 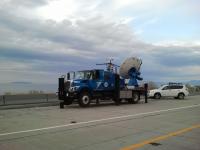 Doppler on Wheels by the Great Salt Lake