Emissions of the greenhouse gas methane into the atmosphere can be traced back thousands of years in the Greenland ice sheet. Using special analytical methods, researchers from the Niels Bohr Institute, among others, have determined how much methane originates from natural sources and how much is due to human activity. The results go all the way back to Roman times and up to the present, where more than half of the emissions are now man-made. The results are published in the scientific journal, Nature.

Methane is an important greenhouse gas, which today is partly emitted from natural sources and partly from human activities. The emissions from natural sources varies due to the climate variations. For example, bacteria in wetlands release methane and less is emitted in dry periods as the wetlands shrink.

Emissions of methane into the atmosphere also come from human actions. For example, methane is emitted from rice fields, which are of course wetlands, and methane is emitted from biomass burning, either from burning of forest areas for cultivation or the use of wood in furnaces. Energy production through coal combustion also produces methane gases. But how can you determine where the methane gas comes from?

Different sources can be traced

"The different sources of methane have different isotopic compositions. The methane produced by the burning of biomass, like wood, contains more of the heavier isotope (carbon-13) relative to the lighter isotope (carbon-12), than methane which is produced in wetlands," explains Professor Thomas Blunier, Centre for Ice and Climate at the Niels Bohr Institute at the University of Copenhagen. The researchers have measured the isotopic composition of the methane in ice cores that are drilled up from the Greenland ice cap at the NEEM project in northwestern Greenland. The ice cap is formed from snow that falls year after year and remains, gradually getting compressed into ice. The ice contains tiny air bubbles from the atmosphere in the snow that fell, and by analysing the composition of the air you can get a climate curve, which tells you about both the annual temperature and methane content.

The question is how far back in history man has had an impact on the methane concentration in the atmosphere?

"We have analysed the methane composition more than 2,000 years back in time. We can see that already 2,100 years ago during Roman times, some cultures were spreading out and burning large amounts of wood for fuel in furnaces to work with metals that required intense heat to process. But the level was still low. The next significant increase was during the Middle Ages around 1,000 years ago. It was a warm period and it was dry so there were presumably many forest fires that emitted methane while the wetlands dwindled and reduced methane emissions from that source. We also find emissions from natural forest fires and deforestation during the so-called 'Little Ice Age' (between 1350 and 1850), which was a very cold and dry period, Emissions of methane increased dramatically from around 1800, when the industrial revolution took off and where there occurred a large increase in population," explains Thomas Blunier.

The analyses show that from around the year 1800 there are large increases that are man-made. Approximately half originates from the production of food – especially rice fields and cattle. Then a lot is emitted from the decomposition of organic materials that are deposited and methane is emitted from burning coal for energy.

"The extent to which our ancestors were able to influence the emissions of methane with their activities is surprising. The general trend from 100 BCE to the year 1600 shows a correlation between the increase in the appropriation of land for cultivation and the emission of the biogenic methane. Today, half of the methane emissions stem from human activities," says Thomas Blunier.

Methane emissions can be traced back to Roman times 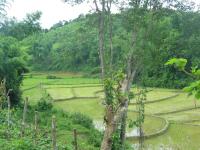