One of the world’s tastiest and most popular cuisines, Mexican food also may be one of the oldest.

Plant remains from two caves in southern Mexico analyzed by a Smithsonian ethnobotanist/archaeologist and a colleague indicate that as early as 1,500 years ago, Pre-Columbian inhabitants of the region enjoyed a spicy fare similar to Mexican cuisine today. The two caves yielded 10 different cultivars (cultivated varieties) of chili peppers.

The study will be published the week of July 9 in the online edition of the Proceedings of the National Academy of Sciences.

“This analysis demonstrates that chilies in Mexican food have been numerous and complex for a long period of time,” said lead author Linda Perry, of the Smithsonian’s National Museum of Natural History. “It reveals a great antiquity for the Mexican cuisine that we’re familiar with today.”

Perry and Kent V. Flannery, of the University of Michigan, studied desiccated plant remains from excavations in Guilá Naquitz and Silvia’s Cave, two dry rock shelters near Mitla in the Valley of Oaxaca, southern Mexico. Guilá Naquitz is famous for its well-preserved plant remains, dating back to the beginnings of squash cultivation in Mexico some 10,000 years ago. Arid conditions through the centuries prevented decay of the crop remains, which include corn, squash, beans, avocados and chili peppers.

This new study focuses on the two upper layers of ash and debris known as Zone “A” and “Super-A,” spanning the period circa A.D. 500–1500. Perry was able to distinguish different cultivars among the abundantly preserved chili peppers, a type of analysis that had not been completed on ancient Mexican chilies.

It is unknown whether the cultivars found in the cave correspond to modern varieties, or if they were types that died out after the arrival of Europeans in Mexico. Perry said one looks like a Tabasco pepper and another like a cayenne pepper, but it is difficult to know how closely related they are to modern varieties without a genetic analysis.

“What was interesting to me was that we were able to determine that they were using the peppers both dried and fresh,” Perry said. (Chilies broken while fresh had a recognizable breakage pattern.) “It shows us that ancient Mexican food was very much like today. They would have used fresh peppers in salsas or in immediate preparation, and they would have used the dried peppers to toss into stews or to grind up into sauces like moles.”

During the period circa A.D. 500–1500, the caves served as temporary camps and storage areas for farmers from Mitla—a major town on the river of the same name—whose cultivated fields evidently extended to the slopes of the piedmont below Guilá Naquitz and Silvia’s Cave. The Zapotec-speaking people planted crops in several environmental zones—river bottoms, piedmont and mountains— probably as a way of buffering risk; it also added variety to the diet.

“In the cave deposits, we can see excellent documentation for the sophistication of the agriculture and the cuisine at this point in time,” Perry said. “You don’t grow seven different kinds of chilies unless you’re cooking some pretty interesting food.”

The Smithsonian’s National Museum of Natural History in Washington, D.C., welcomed more than 5.8 million visitors in 2006, making it the most visited natural history museum in the world. Opened in 1910, the museum is dedicated to maintaining and preserving the world’s most extensive collection of natural history specimens and human artifacts. It also fosters critical scientific research as well as educational programs and exhibitions that present the work of its scientists and curators to the public. 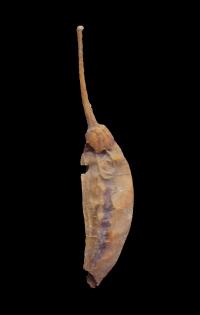