The remarkable strength of ionic crystals is easily explained at the atomic scale: Positively and negatively charged atoms sit side by side in a periodic arrangement that repeats countless times. The strong electrostatic force in between keeps them together.

But what happens when the periodic pattern comes to an abrupt end? Researchers at the Vienna University of Technology have carefully broken potassium tantalate crystals in specific directions, and imaged the resulting surfaces using a state of the art atomic force microscope. Their data was combined with computations performed at the University of Vienna, and a series of remarkable phenomena were ultimately explained. The results were published in the journal Science, and are potentially useful for technologies such as hydrogen production.

It matters how you break it

Imagine the black and white squares on a chess board: they alternate along the rows and columns, and if one looks at an angle from corner to corner, they appear as black and white rows.

The black and white squares in two dimensions resemble a crystal in three dimensions: "If one splits a cubic crystal along a certain direction, one can end up with only positive or only negative charges at the surface. Such a situation would be highly unstable," explains Prof. Ulrike Diebold, head of surface physics group at the Institute of Applied Physics of the Vienna University of Technology. A stacking of purely positive and negatively charged layers would result in a potential of millions of volts across the tiny sample - scientists call this the "polar catastrophe". To avoid this situation, the atoms must reorganize somehow. The question is, how.

"There are different ways in which a surface can react when we split a crystal," says Martin Setvin, first author of the publication. "Electrons can accumulate at certain locations, the crystal lattice can become distorted, or molecules from the atmosphere can stick to the surface, changing its properties."

From islands to labyrinth

When looking with a scanning tunneling microscope, it is immediately obvious that a crystal broken at very low temperature has half of the negatively charged layer on one side, and half on the other. Because the negative islands cover exactly fifty percent of each surface, the surface is electrically neutral. "Yet, the island are large, so the polar catastrophe is not completely avoided: the field underneath them changes the physical properties of the material," says Setvin.

Strangely though, if one raises the temperature of the surface just a little bit, the islands break apart and the atoms form a labyrinth of jagged lines. The "walls" of this labyrinth are just one atom high and four to five atoms wide, and calculations show that this indeed a more stable configuration.

"The labyrinth structures are not only beautiful but also potentially useful," says Diebold. "That's exactly what you want: Tiny structures where strong electric fields occur at the atomic scale." One could use them, for example, to enable chemical reactions that would not proceed by themselves - such as the splitting of water, to produce hydrogen.

"Using these strange crystal surfaces in technology requires that we understand what goes on at the atomic scale," emphasizes Setvin. "That's why microscopy is so important to us. In high-resolution images we can directly observe individual atoms, watch how they move, and finally understand what nature tries to do. Maybe then, we can figure out how to use it."

Strange things happen when a crystal gets split in two 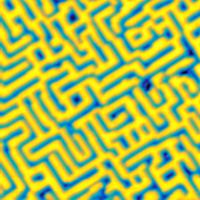