Female fish in the Bahamas have developed ways of showing males that "No means no."

In an example of a co-evolutionary arms race between male and female fish, North Carolina State University researchers show that female mosquitofish have developed differently sized and shaped genital openings in response to the presence of predators and - in a somewhat surprising finding - to block mating attempts by males from different populations.

"Genital openings are much smaller in females that live with the threat of predators and are larger and more oval shaped in females living without the threat of predation," said Brian Langerhans, assistant professor of biological sciences at NC State and the corresponding author of a paper published in the journal Evolution that describes the research.

"Our lab previously showed that male mosquitofish have more bony and elongated genitalia when living among predators. When predators lurk nearby, male fish must attempt to copulate more frequently - and more hurriedly - with females. So females have evolved a way to make copulation more difficult for unwanted males."

The study also shows that females have evolved differently shaped genitalia to deter unwanted advances from males of different populations. This "lock and key" theory suggests that females can better choose advances from wanted males by shaping their genitalia to promote copulation with desired males of their own population or species. Female fish, then, can provide the "lock" best suited to a favored male's "key," and consequently avoid hybridization with maladapted populations or other species - think of low-fitness results in nature like the sterile mule.

"We found that populations with greater evidence of interbreeding had more divergently shaped genitalia in both males and females," said Christopher Anderson, the paper's first author and a former graduate student in Langerhans' lab who is now a doctoral student at East Carolina University. "This suggests that genitalia can evolve, at least partly, to reduce hybridization and thus could be involved in the formation of new species, although more experimentation is needed."

Funding for the work was provided by the National Science Foundation under grant DEB-0842364 and by North Carolina State University.

Abstract: The study of male genital diversity has long overshadowed evolutionary inquiry of female genitalia, despite its non-trivial diversity. Here we identify four non-mutually exclusive mechanisms that could lead to genital divergence in females, and potentially generate patterns of correlated male-female genital evolution: (1) ecological variation alters the context of sexual selection ("ecology hypothesis"), (2) sexually antagonistic selection ("sexual-conflict hypothesis"), (3) female preferences for male genitalia mediated by female genital traits ("female-choice hypothesis"), and (4) selection against inter-population mating ("lock-and-key hypothesis"). We performed an empirical investigation of all four hypotheses using the model system of Bahamas mosquitofish inhabiting blue holes that vary in predation risk. We found unequivocal support for the ecology hypothesis, with females exhibiting a smaller genital opening in blue holes containing piscivorous fish. This is consistent with stronger postmating female choice/conflict when predators are present, but greater premating female choice in their absence. Our results additionally supported the lock-and-key hypothesis, uncovering a pattern of reproductive character displacement for genital shape. We found no support for the sexual conflict or female choice hypotheses. Our results demonstrate a strong role for ecology in generating female genital diversity, and suggest that lock-and-key may provide a viable cause of female genital diversification. 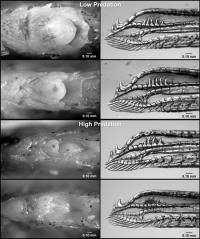