AUSTIN, Texas -- Recent primate research has had a heavy focus on a few charismatic species and nationally protected parks and forests, leaving some lesser known primates and their habitats at risk, according researchers at The University of Texas at Austin and Santa Clara University.

The study, which appeared in Evolutionary Anthropology, examined more than 29,000 research articles published between 2011 and 2015 to determine which primate species and locations were most studied and how that focus affects both conservation efforts and risk for species extinction.

"With nearly a third of primate species listed as critically endangered and 60% of all primate species classified as threatened with extinction by the International Union for Conservation of Nature, the window of opportunity for conserving these mammals is quickly closing," said the study's co-author, Allison McNamara, a Ph.D. student in anthropology at UT Austin. "To protect these species, we have to understand their biology, ecology, life history, behavior and evolutionary flexibility."

The researchers found that more than half of the 504 primate species were left out of the research literature. Of the 240 species studied, 13% of the research was on chimpanzees, compared to 3% of research that focused on the next most prevalent species, the Japanese Macaque. Furthermore, 18% of published research concerned species considered critically endangered, data deficient or non-evaluated by the IUNC.

"There are a large number of primate species and populations that are being ignored, which has the potential to misrepresent primate patterns and influence primatological and anthropological theoretical frameworks," said the study's lead author, Michelle Bezanson, an anthropologist at Santa Clara University. "Additionally, not studying certain species makes it impossible to know what risks they face in their habitat, so that scientists can help inform conservation efforts."

In examining the published works, McNamara and Bezanson were most surprised to find that there were 31 primate habitat countries where no research was being conducted, including Guatemala, Trinidad, Zimbabwe, Sudan, Afghanistan and Singapore. Most of the field work was conducted in national parks and protected areas of mainland Africa (35.6%), followed by the North and South Americas (29.2%), Asia (25.1%) and Madagascar (9.9%).

"The far-reaching benefits of scientific research are missing in some countries," McNamara said. "Active research can benefit communities in more ways than primate and environmental conservation, including increasing financial support for local and national economies, raising awareness of the region's natural history, sparking community involvement in scientific projects, and creating opportunities for educational programs in the region."

The researchers also noted that most published primate research focused on topics other than conservation. However, 17.6% of publications were conservation focused, addressing anthropogenic influences on habitat, population status/density, population health, genetic diversity and enthnoprimatological approaches to human/wildlife interactions.

"The findings in our paper can help researchers identify the holes in our knowledge about primates so that we may begin to fill in the gaps and frame research questions appropriately, especially in the context of the current extinction crisis of primates," McNamara said. "It is imperative that field researchers pay careful attention to the conservation and ethical implications of their research from conception to publication, and that these implications be included in their published work so that our scientific community can track the progress of such efforts."

Research bias may leave some primates at risk 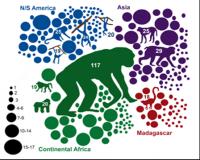