The widespread loss of forest to sugarcane fields on the island of Mauritius has forced kestrels living there to survive by speeding up their life histories, according to a report published online on February 20 in the Cell Press journal Current Biology. By getting an earlier start, the birds are managing to have just as many offspring, even though they die sooner.

Those changes to the kestrels' life history are apparently driven entirely by their early life experiences, the researchers say.

"This adaptive, plastic response is a testament to how resilient this species is," says Samantha Cartwright, a postdoctoral researcher from the University of Reading and lead author on the study. "It has narrowly avoided extinction in the 20th century and is now persisting in a landscape very different from what it would have originally evolved to occupy."

The kestrels' future remains in doubt, given that less than two percent of the native forest that once covered Mauritius remains today. Kestrels already can't live at all on many parts of the island, most of which has been converted to agricultural land.

In 1974, Mauritius kestrels were labeled "the rarest birds in the world," with only four individuals living in the wild. They are now the most intensively monitored wild tropical raptors in the world, which made them a good case study for questions about the effects of habitat change.

The researchers analyzed 23 years of longitudinal data on the Mauritius kestrel to find that females born in territories affected by habitat change shifted investment in reproduction to earlier in life at the expense of late life performance. They also had lower survival rates as young adults.

"We found that birds from both types of habitat still ultimately produce the same number of offspring in a lifetime," Cartwright says. "The strategy is a good one: breeding when younger compensates for the increased risk of dying sooner."

While the birds may be making it for now, Cartwright emphasizes that their shifted life history should serve as a warning about the extent to which human activities have already influenced wild species.

"Taken together, our results suggest that human activities can have a persistent effect on the life histories of wild organisms through natal environmental effects," the researchers write. "Given the ubiquity of human-induced habitat change, the patterns we report could be widespread but remain poorly documented due to the short-term nature of most studies that attempt to quantify only the immediate impact of habitat change on fitness traits." 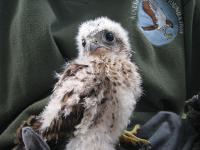 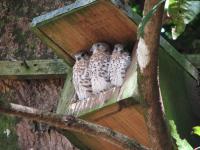