There are few things as important on, and especially off, Earth as breathable, quality air. When air quality is compromised, we often don't have seconds to spare, which is why development of the Multi-Gas Monitor is so important.

This shoebox-sized, battery-powered monitor can measure the concentrations of multiple gases within the air inside of it in less than one second. Researchers designed the Multi-Gas Monitor to be resistant to shock and vibration so it can be used to maintain a safe environment inside spacecraft and in Earth-bound habitats.

The monitor, launched aboard a Soyuz spacecraft in November, was recently activated by the crew aboard the International Space Station to test its performance in space. It will continuously measure oxygen, carbon dioxide, ammonia and water vapor (or humidity) by aiming four low-power, semiconductor laser beams on cabin air within the box.

"These four gases were selected for their importance in the space station environment," explained principal investigator Paul Mudgett, Ph.D., at NASA's Johnson Space Center in Houston. Carbon dioxide, for example, builds up in any closed environment with people in it and must be scrubbed from the air. Ammonia is not normally in the atmosphere but can potentially leak from external coolant loops into the interior.

Currently, the station has a full-time, rack-mounted analyzer, but this new, portable device might one day function as a back-up. The Multi-Gas Monitor also adds the capability of monitoring water vapor aboard the station, a factor in crew comfort.

Monitors that measure multiple gases typically use independent sample cells for each, which greatly increases a device's size, weight and power consumption. This unique sensor uses a design called multi-plexing. Multi-plexing is where a single, compact sample cell uses multiple lasers, each corresponding to a particular gas. "Each gas has its own fingerprint, a specific pattern of light absorption," said co-investigator Jeffrey S. Pilgrim, Ph.D., of Vista Photonics in Santa Fe, N.M. "You select a laser with exactly the right wavelength of light to detect that gas."

This method of measuring the pattern of light absorption by atoms and molecules, known as spectroscopy, typically requires a detector for each light beam. Making sensitive measurements requires a long laser path. "Ordinarily that means a larger sensor, and it's difficult to have multiple lasers at different wavelengths using the same optical cell or detector," said Pilgrim. "You have to duplicate that effort for every gas you want to detect."

The monitor's design also eliminates the need to align the individual lasers, which makes the device much more rugged. That ruggedness not only enables the monitor to withstand the rigors of a launch into space, but also makes the monitor portable. Its ruggedness and portability are enhanced by its ability to operate on batteries, which means the monitor can function as a back-up if power to racks in the station containing the standard gas monitoring equipment were turned off.

Engineers could even set up the device to detect combustion products. According to Mudgett: "If smoke is detected on board, crew members may start switching off racks, since those could be the source of the combustion. Then, to check for fire and to monitor clean up after a fire is extinguished, they need a portable instrument."

"This technology also offers the promise of one-time calibration on the ground," Mudgett added. "Then it never needs calibrating again. Older technology was electrochemical-sensor based, which has limited shelf life and drift issues creating the need to zero and recalibrate. This older technology has to be resupplied to the space station much more often than we'd like."

Once this investigation verifies the technology's long-term viability in microgravity, engineers also could adapt the device to other gases and different uses, not only on future space exploration vehicles and habitats but also for workplace safety on Earth.

"In any closed environment you'd want to look at that same suite of gases," said Pilgrim. "Submarines are an example of an enclosed habitat where you have to scrub carbon dioxide and maintain a certain level of oxygen. The monitor could be applied in any type of industrial environment where carbon dioxide may be elevated. The technique's advantages over what is now used are its inherent selectivity and high level of confidence in its measurements. If it says carbon dioxide is elevated, it really is. It's not a false indication."

This type of laser sensor also has potential application to breath-based medical diagnostics. "Carbon dioxide isotopic ratios in your breath can tell us things about your metabolism," said Pilgrim. "That's a wide open field of medical research, correlating gases with different pathologies. It's the future."

With its winning combination of portability, capability, and speed, the Multi-Gas Monitor's use of the space station as a test bed will forward the development of this adaptable technology. And that could help space crews and Earth-bound humans alike breathe easier. 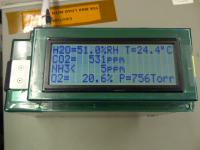