MEDFORD/SOMERVILLE, Mass. (February 4, 2020)-- Researchers led by biologists at Tufts University have discovered that the brains of developing embryos provide signals to a nascent immune system that help it ward off infections and significantly improve the embryo's ability to survive a bacterial challenge. Using frog embryos, which continue to develop with their brains removed, the researchers found that embryos without a brain are not able to marshall the forces of immune cells to an injury or infection site, leading the embryo to succumb to an infection more quickly. By contrast, the presence of a brain crucially helps direct immune cells to the site of injury to overcome the bacterial threat. The study was published today in NPJ Regenerative Medicine.

In a developing embryo, both brain and immune system are not fully formed. The immune system, for its part, consists mostly of an "innate" system of cells that respond immediately to infection and do not require training or produce antibodies. Nevertheless, these cells require signals that prompt them to move toward an infection site and trigger a response.

The research team found that the brain appears to contribute to the signals that guide the nascent immune system. When brainless frog embryos were infected with E. coli, only about 16% of embryos survived, while the presence of a brain protected more than 50% from the infection. By following markers of immune cells, researchers confirmed that the effect is not due to the missing brain somehow hampering immune system development because the composition of the immune cells remained the same with or without a brain. Instead, they found that the effect was due to the brain sending signals to the immune cells to move toward the site of an infection.

"We found that macrophages -innate immune system cells that can swallow up bacteria and destroy them to reduce the burden of an infection do not migrate appropriately without the presence of the brain" said Michael Levin, Vannevar Bush Professor of Biology at Tufts University's School or Arts and Sciences and Associate Faculty at Harvard's Wyss Institute, director of the Allen Discovery Center at Tufts and corresponding author of the study. "Without the brain and its neurotransmitter signals, gene expression and innate immune system activity go awry, resulting in increased susceptibility to bacterial pathogens. "

Other roles for the embryonic brain signaling during infection may include inducing cellular responses, for example preventing cell death or reducing inflammation, that help protect against the harmful effects of the infection.

An examination of aberrations in genetic expression in brainless embryos also pointed to the reduction of the neurotransmitter dopamine (a signaling chemical used in the brain for learning and motivation), and that dopamine may play a role in activating immune cells to migrate in the early stages of an infection. The absence of an immune cell quorum at the infection site leads the brainless embryos to become more susectible to its lethal effects.

"Our results demonstrate the deep interconnections within the bacteria-brain-body axis: the early brain is able to 'sense' the pathogenic bacteria and to elaborate a response targeted to fight against the cellular and molecular consequences of the infection," said Celia Herrera Rincon, Research Scientist II at the Allen Discovery Center at Tufts, and first author of the study.

Other authors of this study include: Jean-Francois Paré, Christina Harrison, Alina Fischer, and Sophia Jannetty at the Allen Discovery Center at Tufts; Christopher Martyniuk, associate professor in the Department of Physiological Sciences at University of Florida; and Alexandre Dinis and Vishal Keshari, graduate students, and Richard Novak, senior staff engineer at the Wyss Institute for Biologically Inspired Engineering, Harvard Universiy.

This research was supported by the Templeton World Charity Foundation Independent Research Fellowship (TWCF0241) and the Allen Discovery Center program through The Paul G. Allen Frontiers Group (12171), as well as The Defense Advanced Research Projects Agency (DARPA, W911NF-16-C-0050), and the National Institutes of Health (AR055993, AR061988). The content is solely the responsibility of the authors and does not necessarily represent the official views of the National Institutes of Health.

Brain links to embryonic immunity, guiding response of the 'troops' that battle infection 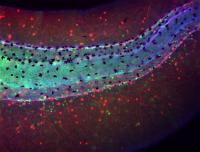