BATON ROUGE – Brent Christner, LSU professor of biological sciences, in partnership with colleagues in Montana and France, recently found evidence that rain-making bacteria are widely distributed in the atmosphere. These biological particles could factor heavily into the precipitation cycle, affecting climate, agricultural productivity and even global warming. Christner and his colleagues will publish their results in the prestigious journal “Science” on Feb. 29.

Christner’s team examined precipitation from global locations and demonstrated that the most active ice nuclei – a substrate that enhances the formation of ice – are biological in origin. This is important because the formation of ice in clouds is required for snow and most rainfall. Dust and soot particles can serve as ice nuclei, but biological ice nuclei are capable of catalyzing freezing at much warmer temperatures. If present in clouds, biological ice nuclei may affect the processes that trigger precipitation.

The concept of rain-making bacteria isn’t far-fetched. Cloud seeding with silver iodide or dry ice has been done for more than 60 years. Many ski resorts use a commercially available freeze-dried preparation of ice-nucleating bacteria to make snow when the temperature is just a few degrees below freezing.

“My colleague David Sands from Montana State University proposed the concept of ‘bioprecipitation’ over 25 years ago and few scientists took it seriously, but evidence is beginning to accumulate that supports this idea,” said Christner.

But, what makes this research more complicated is that most known ice-nucleating bacteria are plant pathogens. These pathogens, which are basically germs, can cause freezing injury in plants, resulting in devastating economic effects on agricultural crop yields.

“As is often the case with bacterial pathogens, other phases of their life cycle are frequently ignored because of the focused interest in their role in plant or animal health,” said Christner. “Transport through the atmosphere is a very efficient dissemination strategy, so the ability of a pathogen to affect its precipitation from the atmosphere would be advantageous in finding new hosts.”

It is possible that the atmosphere represents one facet of the infection cycle, whereby the bacteria infects a plant, multiplies, is aerosolized into the atmosphere and then delivered to a new plant through atmospheric precipitation.

“The role that biological particles play in atmospheric processes has been largely overlooked. However, we have found biological ice nuclei in precipitation samples from Antarctica to Louisiana – they’re ubiquitous. Our results provide an impetus for atmospheric scientists to start thinking about the role these particles play in precipitation,” said Christner. “This work is truly multi-disciplinary, bridging the disciplines of ecology, microbiology, plant pathology and climatology. It represents a completely new avenue of research and clearly demonstrates that we are just beginning to understand the intricate interplay between the planet’s climate and biosphere.”

LSU Professor Looks for Life in and Under Antarctic Ice

More news and information can be found on LSU’s home page at www.lsu.edu 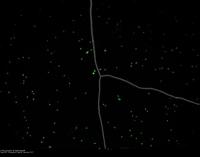