Researchers at Linköping University in Sweden call into question an influential theory of the self-reinforcing dynamics of urban growth. Their research, published in Science Advances, shows that big cities feed on their hinterlands to sustain growth, thereby escalating the urban-rural divide in economic prosperity and individual life chances. Individuals who leave small areas for large cities are better educated and have higher cognitive abilities than those who stay. These findings provide a more nuanced account for the reasons behind the increasingly uneven economic geography observed in many countries, with growing levels of inequality between urban and rural areas.

"Our research shows that people who leave rural areas for cities are, on average, better educated and have higher cognitive abilities. This selective migration fuels the higher than expected outputs of big cities and, at the same time, adds to the cumulative decline of less populated regions" says Dr. Marc Keuschnigg, the lead author from Linköping University's Institute for Analytical Sociology.

Thus, selective migration of highly productive individuals to cities explains a substantial part of urban growth, according to the Linköping researchers' study.

The +15% phenomenon of urban life

Urban scaling is an influential research field that analyzes the benefits and detriments of city life. It demonstrates that cities' levels of wealth, innovation, crime, and contagious disease follow highly predictable patterns grounded in population size. This line of research has established that population size is the single most important factor in the functioning of cities, and that many social and economic indicators increase not simply proportionally to city size but are subject to nonlinear dynamics: doubling city size, for example, reportedly raises total income, the number of patents, the number of residential moves, and the number of romantic breakups by roughly 115%--suggesting that urbanites' productivity and pace of life increase as their cities grow. The extra 15% is referred to as "superlinear scaling" or the +15% phenomenon.

The mathematical models proposed to account for these regularities suggest that superlinear scaling of urban outputs is a consequence of increased social interaction in dense urban environments. In large cities, there are more people to exchange ideas with, as well as to cooperate with in bringing about innovations, new forms of social life, and additional wealth. Consequently, urban scaling researchers see the +15% phenomenon as a self-reinforcing process that produces winners but no losers, implying that urban growth is socially beneficial to contemporary societies in general.

Utilizing Swedish register data with unique granularity, the study tests whether the +15% phenomenon truly can be attributed to increased social interconnectivity in cities. Their geocoded micro-data capture the dissimilarities in the population composition between metropolitan areas of different size and provide better information on the micro-mechanisms responsible for observed nonlinearities. The group's research finds that social interactions explain only half of the previously reported agglomeration effects and, in contrast to existing explanations of superlinear urban scaling, they find that differences in population characteristics between metropolitan areas crucially drive the phenomenon.

"Our results are of considerable policy relevance, because they identify the migration of talented people from smaller areas to larger cities as an important force behind observed agglomeration effects" says Dr. Marc Keuschnigg.

Those moving from smaller areas to one of Sweden's larger cities have, on average, 1.8 more years of education and their cognitive ability (measured for men in a standardized test during military conscription) is 0.4 standard deviations higher than for those who stayed. This is consequential for societies because strongly selective migration has cumulative effects on local populations in both sending and receiving regions.

Big cities feed on their hinterlands to sustain growth 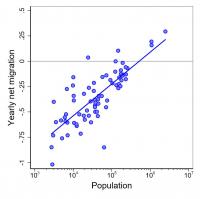