Arid and semiarid ecosystems are expected to experience significant changes in temperature and precipitation patterns, which may affect soil organisms in ways that cause surfaces to become lighter in color and thus reflect more sunlight, according to a new U.S. Geological Survey study.

This change will bounce more energy back into the atmosphere, which can alter global climate.

Drylands make up more than 40 percent of the earth's land surface. The living skin of the desert, called biological soil crusts or biocrusts, is a community of mosses, lichens and/or cyanobacteria that is critical to human and ecosystem health and climate in the Southwest and other dryland areas.

"The discovery that climate change impacts on biocrusts could feedback to future climate is a critical factor that hasn't been considered in the past," said Austin Rutherford, lead author of the new USGS study. "This information is an important step in understanding climate, and may be helpful in developing future global climate models."

USGS scientists created outdoor testing plots located on the Colorado Plateau, where large squares of biocrusts were exposed to different warming and precipitation factors over time. Researchers not only looked at how the biocrusts responded, but also measured the amount of energy that the different biocrust communities reflected back into the atmosphere relative to how much energy came in from the sun. This effect is known as albedo.

Warming and watering treatments had large impacts on biocrust communities, transforming them from the dark to light-colored communities, and causing energy that was previously absorbed by the dark surfaces to reflect back into the atmosphere. These factors led to large increases in albedo and may represent a previously unidentified effect on future climate by slowing how fast the earth warms.

The replacement of biocrust mosses and lichens with light-colored cyanobacteria may also result in increased soil erosion, decreased soil fertility and decreased removal of the greenhouse gas carbon dioxide from the air.

Biocrusts provide soil stability and prevent erosion, and could help prevent the large dust storms that move through big southwestern cities such as Phoenix. Dust storms are a human health issue, as airborne particles can cause lung cancer, asthma and other respiratory problems.

Many human activities can be unintentionally harmful to biological crusts. The biocrusts are no match for the compressional stress caused by footprints of livestock or people or the tracks from vehicles.

"Our study shows that effects of human activity may not only alter soil stability and fertility, but also the way energy is exchanged between the planet and its atmosphere," Rutherford said.

Changing temperatures and precipitation may affect living skin of drylands 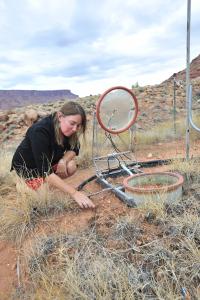