The Atmospheric Infrared Sounder or AIRS instrument aboard NASA's Aqua satellite captured an infrared image of the temperatures in Tropical Storm Andrea's cloud tops on June 6 at 2:41 a.m. EDT. The coldest cloud top temperatures (in excess of -63F/-52C) and heaviest precipitation was over the eastern Gulf of Mexico and southeastern Florida at the time of the image.

NASA's Tropical Rainfall Measuring Mission or TRMM satellite flew directly above tropical storm Andrea on Thursday, June 6, 2013 at 0508 UTC (1:08 a.m. EDT). This orbit showed that Andrea had a large area of moderate to heavy rainfall in the northeast quadrant of the storm and precipitation was spreading over the state of Florida.

At NASA's Goddard Space Flight Center in Greenbelt, Md. Hal Pierce of the TRMM Science Team used TRMM data create a 3-D view of Tropical Storm Andrea. The 3-D view from the west was derived from TRMM Precipitation Radar (PR) data captured when Andrea was examined by the TRMM satellite with the June 5, 2234 UTC (6:34 p.m. EDT) orbit. It clearly showed that the majority of the heavy convective rainfall was located on Andrea's eastern side. TRMM PR also showed that the tallest convective thunderstorms reached heights of about 14km (~8.7 miles).

On June 6, at 2 p.m. EDT, Tropical Storm Andrea was located near 29.0 north and 83.6 west. That's just 35 miles (55 km) west-southwest of Cedar Key, Fla. and 100 miles (160 km) east-southeast of Apalachicola. Andrea's maximum sustained winds were near 60 mph (95 kph) and had slightly increased forward speed, moving northeast at 17 mph (28 kph). Minimum central pressure is 994 millibars, down from 997 millibars during the morning hours.

At 2 p.m. EDT, the National Hurricane Center noted that the center of Andrea will reach the coast of the big bend area of Florida in the next few hours.

A Tropical Storm Warning is in effect for the west coast of Florida from Boca Grande to Indian Pass, from Flagler Beach, Fla. to Cape Charles Light, Va., the Pamlico and Albemarle Sounds, and the lower Chesapeake Bay south of New Point Comfort, Va. For the most up to date forecasts, visit the National Hurricane Center web page at: http://www.nhc.noaa.gov.

Andrea is expected to move northeastward after crossing Florida and travel near the east coast of the United States through Saturday, June 8. 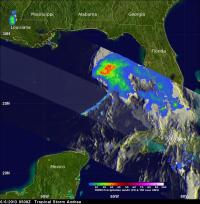