For the first time, coyotes (Canis latrans) and crab-eating foxes (Cerdocyon thous) are occurring together. According to a recent study by researchers at the Smithsonian Tropical Research Institute (STRI) and collaborating institutions, deforestation along the Mesoamerican Biological Corridor may be the reason why canid species from North and South America ended up living side by side in eastern Panama, far from their original ranges.

When the Panama land-bridge emerged from the sea millions of years ago, mammals like giant sloths and saber-toothed cats dispersed between North and South America across the new corridor linking the continents, a phenomenon known as the Great American Biotic Interchange. Today, urban and agricultural development and deforestation are generating a new passageway of deforested habitats, ideal for invasive species adapted to human disturbance. Coyotes, native to regions spanning Canada to Mexico--and crab-eating foxes, commonly found between Colombia and northern Argentina, are among them.

"We knew the coyotes were moving south and the foxes north, but we didn't know how far they'd gotten, or what would happen when they met up," said Roland Kays, research associate at STRI, scientist at the North Carolina Museum of Natural Sciences and co-author of the new paper published in the Journal of Mammalogy. "Systematic camera trapping across both forests and agricultural land helped us find out."

To understand this phenomenon, scientists combined camera-trap surveys with observations from the literature and roadkill records. Their analysis revealed that coyote and crab-eating fox populations have colonized the agriculture-dominated corridor between Panama City and Lake Bayano. A few coyotes were even detected on the western edge of Panama's Darien National Park, the last barrier before they invade South America.

Jaguars and other tropical forest predators may have formed a barrier, keeping coyotes from moving farther south. "There is information about coyotes in Panama since 1981, and they have made progress across the isthmus thanks to the expansion of the livestock and agricultural frontier and deforestation in some areas of the country," said Ricardo Moreno, STRI research associate, president and researcher at Fundación Yaguará Panamá and co-author of the paper. "If the population of jaguars decreases and deforestation increases in Darien, surely the coyote will soon enter South America."

Despite originating on opposite sides of the American continent, these two canid-species evolved comparable traits: they are both nocturnal, have similar diets and use the same types of habitats. They have never been observed together on camera, but the authors suggest that their common characteristics could potentially lead to competition in their newly shared range.

For the researchers, a surprising revelation of this study was the dog-like appearance of some coyotes captured by camera traps. Many had unusually short tails, hound-like muzzles and variable coat patterns, indicating a possible recent hybridization with dogs. This could benefit coyotes if they inherit dog genes associated with fruit-eating, as they might be better able to exploit tropical fruit.

If deforestation continues in Panama and Central America, crab-eating foxes and coyotes could be among the first mammals in a new 'Not-So-Great American Biotic Interchange' with unknown ecological impacts on native prey or competitors. To address this challenge, the scientists emphasize the urgent need to prioritize conservation research that continues to explore the effects of these invasive species in relation to fragmentation, reforestation and the persistence of native apex predators, like jaguars, in the region.

"We found coyotes using fragmented rainforests, but not the bigger forests where jaguars persist," Kays said. "We think keeping the Darien jaguar-friendly will also make it hostile to coyotes." 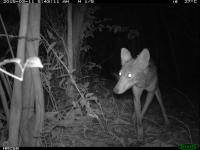