PerFluoroAlkyl Substances (PFASs) and precursor compounds have been used in a wide variety of commercial and industrial products over the past six decades. Applications include water and oil repellent coatings, e.g. for textiles, paper products, carpets and food packaging, pharmaceuticals and surfactants in cleaning products and fire-fighting foams. PFASs are highly resistant to chemical, thermal and biological degradation.

PFASs and their precursor compounds have shown a dramatic increase and dispersal around the world over the past four decades. An increasing amount of information is becoming available on the toxicity of these compounds. Hence, studies have documented the toxicity of PFASs on wildlife and human health, including carcinogenesis, genotoxicity and epigenetic effects as well as reproductive and developmental toxicities, neurotoxicity, effects on the endocrine system and immunotoxicity.

Bioaccumulative PFASs enter all parts of the brain

Despite the fact that the liver is considered the major repository in the body for most PFASs, some shorter chain compounds from this grouping have previously been reported in the brain of chicken embryos, suggesting that they are able to cross the blood–brain barrier.

Previous studies have shown a dramatic biomagnification of several PFASs, and particularly one known as perfluorooctane sulfonate (PFOS) as well as several compounds of the perfluorinated carboxylate (PFCAs) grouping, in polar bears. PFOS have been shown to be at concentrations in the liver that are 100 fold higher than the ringed seals on which they are predating. In a new study Arctic researchers from Carleton University in Canada and Aarhus University in Denmark have used the polar bear as a sentinel species for humans and other predators in the top of the food chain. The researchers demonstrated accumulation of PFOS and several PFCAs in eight brain regions of polar bears collected from Scoresby Sound, East Greenland. Dr. Robert Letcher, Carleton University, explains:

"We know that fat soluble contaminants are able to cross the brain-blood barrier, but is it quite worrying that the PFOS and PFCAs, which are more associated with proteins in the body, were present in all the brain regions we analyzed."

"If PFOS and PFCAs can cross the blood-brain barrier in polar bears, it will also be the case in humans. The brain is one of the most essential parts of the body, where anthropogenic chemicals can have a severe impact. However, we are beginning to see the effect of the efforts to minimize the dispersal of this group of contaminants."

The eight carbon chain PFOS and perfluorooctane carboxylate (PFOA) are PFASs have been phased out and are no longer produced in the western world. However, production in China, today the only known production source of PFOS and PFOA, has increased by roughly a factor of 10, since it was phased out in the USA. Unfortunately, no emission inventory is so far available from this region. Furthermore, replacements for PFOS and PFOA are now marketed and produced in e.g. the U.S.A. and China, which generally have perfluorinated carbon chains that are shorter or branched.

Another recent study from Aarhus University documents that PFOS concentrations in Greenlandic polar bears and ringed seals started to decline after 2006. Other wildlife populations closer to the sources in Europe and North America have shown a decline prior to the Greenlandic animals. Rune Dietz comments:

"It is promising to see that the PFAS are on the decline. This development should be encouraged by the authorities globally.

In the meantime my best advice to the consumers is to go for environmentally labeled products. But avoiding products is difficult, because PFASs are so widespread in many kind of products and they are rarely declared."

With fluorine in the tail

Perfluoroalkyl substances (PFASs) constitute a group of compounds where one end of the molecule consists of a carbon chain in which all the hydrogen atoms are replaced by fluorine atoms. This so-called perfluoroalkyl "tail" can be short or long, but the strong C-F bonds make the tail more or less impossible to degrade, compared to the more well known CFC-bonds. The best known PFAS is PFOS with an eight-chained perfluoroalkyl tail. 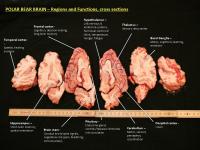 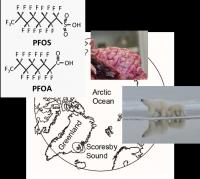 With Fluorine in the Tail