Researchers have discovered that a social, stingless bee from Brazil feeds its larvae on a special type of fungus grown in the nest. Without it, very few young survive, according to a report in the Cell Press journal Current Biology on October 22.

The discovery marks the first such relationship between a social bee and cultivated fungus. The findings also raise concerns about the use of fungicides in agriculture, the researchers say.

"These bees do not survive without the fungus," says Cristiano Menezes of the Brazilian Agricultural Research Corporation (EMBRAPA). "This is amazing because it opens up a new field in bee research to understand the role of this and other microorganisms in colony health. On the other hand, it is frightening because fungicides and bactericides are widely sprayed during blooming periods of several crops and may affect bees' symbionts and consequently their health."

The researchers made the discovery quite by accident. Menezes was on a quest to produce queens of the Brazilian stingless bee (Scaptotrigona depilis) in the lab. When he kept the developing bees in a humid chamber, he saw a lot of white fungus begin to grow out of control, and then the larvae died. He thought it was some kind of a disease plaguing the bees.

But then he noticed the fungus growing much less rampantly in natural brood combs. It seemed as though something in the bees' more natural environment was keeping the fungus under control. He tried raising the bees under less-humid conditions and noticed a big change.

"I observed that the fungus grew intensively for a few days and then disappeared," he says. "After that, I obtained more than 90 percent survival rate in the trials."

He suspected that the larvae were eating the fungus. When he recorded their behavior in a natural brood comb, he could see them gobbling it up (see video).

The researchers now report that larvae reared in dishes on sterilized larval food supplemented with fungal mycelia survive 76% of the time. Those raised without the fungus rarely make it--surviving just 8% of time.

The fungus originates from the material the bees use to make brood cells. "Since the bees recycle and transport this material between nests, fungus would be transferred to newly built cells, and also to newly founded nests," the researchers explain.

Menezes suspects other bees will be found to depend on fungi too. He says he has already seen similar kinds of fungi in other closely and more distantly related stingless bee species.

"Symbiosis between bees and microorganisms seems to be much more frequent than we thought before and is being explored recently by other researchers to improve colony health," Menezes says. "The diversity of social, sub-social, and non-social bees is so big, especially in the tropics, that it is quite probable that other farming systems exist."

Interestingly, a very similar fungus of the genus Monascus has been used in Asian cultures for centuries as a food preservative. Related fungi are known to secrete chemicals with anti-microbial, anti-cancer, and other health benefits.

"This symbiotic relationship may reveal new substances that can be applied to human and bee health," Menezes says.

This work was financially supported by FAPESP.

These social bees farm and eat fungus or die 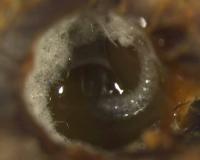