For the first time, scientists have been successful in measuring the processes by which an entire forest "breathes," using sophisticated technology involving flux towers and new instrumentation that can precisely measure two different types (isotopes) of carbon dioxide in the air. A team led by Richard Wehr and Scott Saleska at the University of Arizona obtained detailed long-term measurements of the respiration and photosynthesis rates of a temperate deciduous forest during the day and the night.

Overturning textbook knowledge, the researchers discovered that the trees "exhale" less carbon dioxide during the day than previously thought, and that forest photosynthesis doesn't decline over the course of the summer. The results, published in the journal Nature, close a long-standing gap in our understanding of the carbon cycling between terrestrial ecosystems and the atmosphere and could be useful in making more accurate models to predict the long-term effects of global climate change. The work was funded primarily by the U.S. Department of Energy.

"Our study is about how a whole forest ecosystem consumes and produces carbon dioxide, or CO2, the main greenhouse gas linked to human-induced climate change," says Wehr, a research associate in Saleska's lab in the UA's Department of Ecology and Evolutionary Biology. "If we want to predict more precisely how human perturbation is going to impact atmospheric CO2, and therefore climate, we have to better understand how forests take up and release carbon."

Forests consume CO2 by photosynthesis, the process plants use to turn CO2 into organic material, harvesting the energy from sunlight. Plants can only do that during the day. But day and night, plants, microbes and animals like humans are always producing CO2 by respiration, which is the breaking down of organic material (food) to get the energy out of it, releasing CO2 in the process.

Researchers have wanted to be able to measure forest CO2 production (respiration) and consumption (photosynthesis) independently for decades. Lacking a means to do that, they have relied on simpler measurements and some reasonable but untested assumptions. This study is the first to tease apart how much each of the two processes contributes to carbon dioxide cycling between the forest and the atmosphere over days, months and years.

The data revealed that some conventional wisdom used as a base for climate models needs to be revised.

"Because respiration rates generally increase with temperature, forests have typically been modeled as respiring more during the warm day than the cool night," says Wehr. "It turns out that's not the case. We found that forest respiration is as much as 50 percent less during the day than at night in the late spring and early summer."

Deciduous forests in temperate zones were also thought to photosynthesize less and less efficiently as the summer goes on, similar to what happens as leaves age in some other plants like cotton. However, the new study confirmed that temperate deciduous trees are different: The forest consumes CO2 just as well when the leaves are old as when they are new.

The authors used highly sensitive instruments mounted on towers as well as soil chambers to continuously measure the ratio of two isotopes of carbon, which differ by their atomic mass. They measured the amounts of the two different isotopes in air near the ground and above the canopy at the Harvard Forest Environmental Measurements Site, in a mostly deciduous forest dominated by red oak and red maple in Massachusetts, from 2011 to 2013.

Because photosynthesis, but not respiration, prefers the lighter carbon isotope, the researchers could detect the separate carbon flows from each of the two processes by measuring the ratio of the two carbon isotopes.

"If a gust of air comes up from the forest with an isotope ratio that's off by one part in 30,000, we can tell," Wehr says. "That's like noticing that one person is taller than another by the width of a human hair as they walk past you."

The authors of the study say the results should help improve models designed to predict climate.

"There are lot of knobs in those models that have to be tuned to describe reality," Wehr says, "and if you have the wrong idea about what forests have been doing, then you turn the knobs wrong and your predictions will be off."

"Thanks to forests that sequester some of the carbon we are emitting by burning fossil fuels, human-induced climate change is happening more slowly than it otherwise would," says Saleska. "But in order to understand what forests will do in the next 50 to 100 years, we have to do a better job at understanding how forest photosynthesis and respiration separately respond to changing weather and climate. This study offers a way forward for doing just that with better measurements, as shown by the new insights it is already giving us into how forests respond to sunlight and to the changing of the seasons."

Says Saleska: "Our results don't change the big picture of climate change. It's not like this means that climate change isn't real, but it changes how well can we predict future trends. If you look at the prognoses published by the International Panel on Climate Change, for example, you'll notice that they involve large ranges. We are trying to figure out the details to narrow down those ranges to make those prognoses more accurate."

The paper, "Seasonality of temperate forest photosynthesis and daytime respiration," has been scheduled for publication in Nature on 30 June 2016. The co-authors on the paper are: William Munger and Steven Wofsy at the School of Engineering and Applied Sciences and the Department of Earth and Planetary Sciences at Harvard University in Cambridge, Massachusetts; Barry McManus, David Nelson and Mark Zaniser at Aerodyne Research Inc. in Billerica, Massachusetts; and Eric Davidson of the University of Maryland Center of Environmental Science in Frostburg, Maryland. 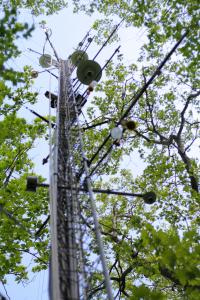 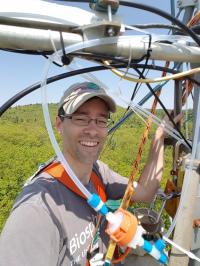