Hundreds of methane flares observed offshore Western Svalbard in the Arctic are caused by a process that started at the end of the last ice age, according to the study. The methane release happens because the gas is freed from melting hydrates - an icy substance found below the ocean floor, containing methane in a cage of frozen water.

Ocean water warming was previously thought to be the cause of the hydrate melt in this particular area. But the study in Nature Communications suggests otherwise.

"Our investigations show that uplift of the sea floor in this region, caused by the melting of the ice masses since the end of the last ice age, is probably the reason for the dissolution of methane hydrate." says first author of the study Professor Klaus Wallmann at GEOMAR.

Methane hydrate forms in cold temperatures and under high pressure - conditions that can be found at the bottom of the ocean.

When the Earth's crust naturally rebounds as ice sheets begin to shrink, the seafloor changes position. That and a subsequent shallowing of the water column above can cause he hydrates to destabilise and dissolve. Through a combination of sediment cores analyses and ice-sheet modelling, the study shows that this area has probably been steadily leaking methane from hydrates for 8000 years.

An important part of the study is the reconstruction of the Eurasian ice sheet that once covered the area. It was developed by scientists at CAGE - Centre for Arctic Gas Hydrate Environment and Climate, and shows that seafloor off Western Svalbard was covered by a large ice sheet during the last glaciation.

As that ice sheet retreated, some 20,000 years ago, the sea floor started bouncing back. The process is called isostatic rebound: the rise of land masses that were depressed by the huge weight of ice sheets.

The uplift of the crust is a very slow process that is still happening and affecting the environment. Instead of abrupt release of methane which is evident in other parts of the Arctic, the hydrate melt in ocean floor off Western Svalbard caused slow and steady seeps that are ongoing.

"This study illustrates the colossal influence that the ice sheets that once covered Eurasia had on their surrounding environment" says co-author Henry Patton, researcher at CAGE. Another example according to Patton is the uplift in the Baltic, which is still observable today, though the pace of rebound has now slowed significantly to less than a centimetre per year.

The scientists behind the study suggest that warming of the oceans due to recent anthropogenic climate change is not to blame for the methane seeps off Western Svalbard.

"But gas hydrates are still widespread elsewhere beneath the Barents Sea and across the Arctic. How these reservoirs respond to any future changes in ocean bottom-water temperatures, natural or anthropogenic, is still a topic very much open for discussion." says Patton.

One of the other conclusions from the study is that the impact of future seabed methane fluxes may be underestimated. Hydrates should be seen as a seal blocking the flux of methane from underlying reservoirs, and not the total source of gas in themselves. 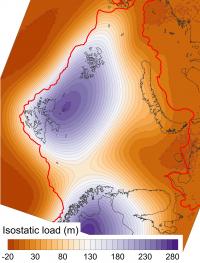 Depression of the Crust