Des Moines, Iowa – December 11, 2008 – Throughout history, human beings have used the whistle for everything from hailing a cab to carrying a tune. Now, an orangutan's spontaneous whistling is providing scientists at Great Ape Trust of Iowa new insights into the evolution of speech and learning.

In a paper published this month in Primates, an international journal of primatology that provides a forum on all aspects of primates in relation to humans and other animals, Great Ape Trust scientist Dr. Serge Wich and his colleagues provide the first-ever documentation of a primate mimicking a sound from another species without being specifically trained to do so. Bonnie, a 30-year-old female orangutan living at the Smithsonian National Zoological Park in Washington, D.C., began whistling – a sound that is in a human's, but not an orangutan's, repertoire – after hearing an animal caretaker make the sound.

"This is important because it provides a mechanism to explain documented between-population variation in sounds for wild orangutans," Wich said. "In addition, it counters a long-held assumption that non-human primates have fairly fixed sound repertoires that are not under voluntary control. Being able to learn new sounds and use these voluntarily are also two important aspects of human speech and these findings open up new avenues to study certain aspects of human speech evolution in our closest relatives."

Previous studies have indicated that orangutans and chimpanzees are capable of species-atypical sounds and vocalizations, but only under the strong influence of human training. Bonnie, however, was not explicitly trained to whistle, according to Wich and his co-authors – Great Ape Trust scientists Dr. Karyl Swartz and Dr. Rob Shumaker; Madeleine E. Hardus and Adriano R. Lameira, doctoral candidates at the Utrecht University in The Netherlands assigned to the Ketambe Research Center in Sumatra, where Wich is research co-manager; and Erin Stromberg, an animal caretaker at the National Zoo.

Scientists have long known that orangutans copy physical movements of humans, but Bonnie's whistling indicates that the learning capacities of orangutans and other great apes in the auditory domain might be more flexible than previously believed, Wich said. The behavior goes against the argument that orangutans have no control over their vocalizations and the sounds are purely emotional – that is, an involuntary response to stimuli such as predators.

Bonnie appears to whistle for the sake of making a sound rather than to receive a food reward or some other incentive. If asked to whistle, she is likely to oblige, another indication to scientists that she makes the sound voluntarily.

In their paper, Wich and his colleagues also shared anecdotal information about Indah, a female orangutan who lived with Bonnie at the National Zoo before moving to Great Ape Trust in 2004. Indah also began to whistle some years after Bonnie was first observed making the sound in the late 1980s, but Indah died before recordings could be made of her whistles. Scientists believe that Indah's whistling was a vocalization learned from Bonnie.

That compares with what scientists assume about social learning in wild orangutan populations. For example earlier work by Dr. van Schaik and colleagues showed that wild orangutans in one population make a "raspberry" sound during nest-making, while orangutans in another population make a "nest smack" sound when engaged in the same activity. Wich said it's unlikely that purely genetic or ecological factors explain the differences in sounds of different orangutan populations. Rather, it's more likely others copy one orangutan's innovative sound because the sound serves a function.

"This is a very strong indication that different sounds among wild populations are learned and are not purely genetically or ecologically based," Wich said. "This is a great indication that orangutans can learn sounds not in their repertoire from another species, and they are flexible in using them."

The scientific investigation with Bonnie at the National Zoo was supported in part by a grant from the David Bohnett Foundation and complements field studies of wild orangutans, where differences have been noted in the call repertoires between populations. A strength at Great Ape Trust is the ability of its scientists to conduct simultaneous studies on both captive orangutans and wild orangutans on the Indonesian island of Sumatra at the Ketambe Research Center, where Wich is research co-manager.

"Bringing captive and field research together is an unharvested field," Wich said, "and it offers great potential to Great Ape Trust."

The research also builds on earlier investigations by ape language pioneer Dr. Sue Savage-Rumbaugh a scientist with special standing at Great Ape Trust, and others on the ability of great apes to imitate human speech. Specifically, Savage-Rumbaugh's 1991 investigation centered on whether the bonobo Kanzi, a member of the colony of bonobos now living at Great Ape Trust, might have structurally different vocalizations than bonobos in another group. In a 2004 study, Savage-Rumbaugh looked at whether Kanzi was attempting to imitate human speech.

The results of these studies did enlarge scientists' appreciation of the plasticity in primate sound and vocal learning and indicated that primates might have some plasticity to produce completely new sounds, Wich and his colleagues wrote.

The new findings reopen the door on such research.

"One of the main things we do not understand yet is the evolution of speech," Wich said.

Wich will present the findings on Dec. 18 at a scientific symposium on orangutan genetics at the University of Zürich, Switzerland.

Great Ape Trust of Iowa is a scientific research facility in southeast Des Moines dedicated to understanding the origins and future of culture, language, tools and intelligence. When completed, Great Ape Trust will be the largest great ape facility in North America and one of the first worldwide to include all four types of great ape – bonobos, chimpanzees, gorillas and orangutans – for noninvasive interdisciplinary studies of their cognitive and communicative capabilities. 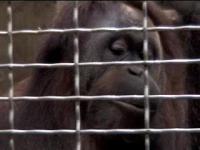