The most comprehensive family tree of meat-eating dinosaurs ever created is enabling scientists to discover key details of how birds evolved from them.

The study has shown that the familiar anatomical features of birds – such as feathers, wings and wishbones – all first evolved piecemeal in their dinosaur ancestors over tens of millions of years.

However, once a fully functioning bird body shape was complete, an evolutionary explosion began, causing a rapid increase in the rate at which birds evolved. This led eventually to the thousands of avian species that we know today.

A team of researchers, led by the University of Edinburgh, examined the evolutionary links between ancient birds and their closest dinosaur relatives. They did this by analysing the anatomical make-up of more than 850 body features in 150 extinct species, and used statistical techniques to analyse their findings and assemble a detailed family tree.

Based on their findings from fossil records, researchers say the emergence of birds some 150 million years ago was a gradual process, as some dinosaurs became ever-more bird-like over time. This makes it very difficult to draw a dividing line on the family tree between dinosaurs and birds.

Findings from the study support a controversial theory proposed in the 1940s that the emergence of new body shapes in groups of species could result in a surge in their evolution.

Dr Steve Brusatte, of the University of Edinburgh's School of GeoSciences, who led the study, said: "There was no moment in time when a dinosaur became a bird, and there is no single missing link between them. What we think of as the classic bird skeleton was pieced together gradually over tens of millions of years. Once it came together fully, it unlocked great evolutionary potential that allowed birds to evolve at a super-charged rate."

Dr Graeme Lloyd, of the University of Oxford, said: "Our study adds to a growing number of works that approach this problem from different angles, but all seem to confirm that the origin of birds was a truly special event in Earth history. It is particularly cool that it is evidence from the fossil record that shows how an oddball offshoot of the dinosaurs paved the way for the spectacular variety of bird species we see today."

The study is published in the journal Current Biology. The work was supported by the European Commission, National Science Foundation, University of Edinburgh, Columbia University, American Museum of Natural History and the Swarthmore College's Research Fund and James Michener Faculty Fellowship. 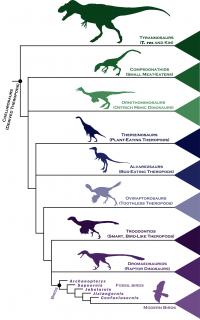