Daejeon, Republic of Korea, November 5th, 2012—Watching a 3 dimensional (3D) film at home can be just as real and fun as going to a movie theater. Professor Yang-Hann Kim and Research Professor Jung-Woo Choi from the Department of Mechanical Engineering, KAIST, have succeeded in building an audio rendering system that will considerably improve the current 3D audio effects technology.

3D audio effects can be produced by stereo speakers, surround-sound speakers, speaker-arrays, or headphones, which essentially give an illusion to listeners that sounds are being produced in the 3D space around them. The effects are the result of manipulating the listener's sound perception through the placement of virtual sound sources in the 3D space to alter the way the sound is played. In a 3D audio and acoustic environment, listeners can recognize the location, distance, and direction of sound sources including behind, above, or below the listeners, thereby providing them with a more interactive, engaging, and real-time experience when enjoying movies, games, or music.

Professor Kim's team completed a set of simple integral equations to create a virtual sound source inside of an area enclosed with loudspeakers (deployed in linear or circular shapes). So far, the placement of a virtual sound source within the array of loudspeakers and the reproduction of sound field from them are considered "physically unlikely," and hence they have been approached in an approximated form. This is because the sound field reproduced from the internal virtual source should satisfy an inhomogeneous wave equation, a numerical computational method applied in acoustics engineering to create a target sound field where a sound source does not exist.

The research team proposed a theoretical basis for the solution, and this research appeared in the September 2012 issue of IEEE Transactions on Audio, Speech, and Language Processing published by the IEEE Signal Processing Society. (http://ieeexplore.ieee.org/stamp/stamp.jsp?arnumber=06175109)

Based on the integral equations, Professor Kim and his team developed a loudspeakers array system that is composed of a large number of loudspeakers, ranging from 24, 34, 50, and up to 64 speakers and created a virtual sound source, "Virtual Sound Ball," within the array system. (Youtube link for virtual sound ball: http://www.youtube.com/watch?v=NS4mn0_bLmw)

Professor Kim explained the new technology, "We used many loudspeakers in order to build multipole virtual sound sources that would give a listener more freedom to move around without losing an auditory illusion of target sound fields perceived by the listener. Unlike the common example of sound field reproduction from a virtual source located outside the loudspeakers array system, our method, putting the sound source inside the speakers system, will offer not only a very high quality 3D sound, but also an individualized, customized optimal sound that can be controlled and adjusted based on the needs of each listener."

Professor Yang-Hann Kim and Jung-Woo Choi established a controllable sound field within a restricted area based on the loudspeaker setup and formed multipole sound balls by focusing and localizing acoustical energy both in space and time while minimizing external radiation. Sound balls can be moved around as needed by a listener and controlled through software interface, a device used for the adjustment of spatial attributes of sound to create 3D audio effects.

The research team developed a "spatial equalizer" that allows a smart phone or tablet PC, via wi-fi, to control the sound field reproduced from the sound ball just the way a balance knob in a stereo audio system works—a listener controls the balancer until he/she finds the perfect sound.

"We expect that this technology, which is ready for an immediate translation into commercial products, will upgrade our home and personal audio system to the level of professional settings," said Professor Jung-Woo Choi.

This research is supported by the Korea Electrics Technology Institute (KETI). 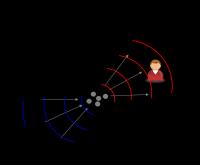