The White House has awarded Rice University physicist Wei Li a Presidential Early Career Award for Scientists and Engineers (PECASE), the government's highest honor for people who have recently begun their research careers.

Li, a nuclear and particle physicist who joined Rice in 2012, is using experiments at the world's largest particle accelerator, Europe's Large Hadron Collider (LHC), to probe the fundamental building blocks and forces of nature.

"This award recognizes Wei's remarkable research at the most fundamental level and furthest frontiers of our understanding of matter itself," said Peter Rossky, dean of Rice's Wiess School of Natural Sciences. "We are excited that he is playing a leading role in setting the course for this great international effort."

Li is one of 102 PECASE winners named this week by President Barack Obama.

"I was surprised and very happy to learn that I had won," Li said. "I knew I had been considered for this award, but this is highly competitive, and very few people in my area have won. I'm pleased that relativistic heavy-ion physics was recognized with such an important honor."

PECASE was established in 1996 to honor the nation's most promising researchers. Thirteen federal departments and agencies annually nominate scientists and engineers at the start of their independent careers whose work shows exceptional promise. Li's nomination was put forward by the Department of Energy (DOE) in 2014 after he won a prestigious DOE Early Career Award.

Li, an assistant professor of physics and astronomy, is using his DOE funding to expand his exploration of novel properties of quark-gluon plasma at the LHC.

Quarks and gluons are the building blocks of protons and neutrons, and physicists can create and study them by smashing those particles together in head-on collisions at velocities approaching the speed of light. The energy produced in such collisions recreates the hot, dense conditions that last existed in the universe a fraction of second after the Big Bang, the last time quark-gluon plasma existed in nature.

Scientists first created quark-gluon plasma in 2005 by smashing together lead nuclei at Brookhaven National Laboratory. Those experiments showed that the plasma, which is often referred to as "quark soup," behaved as an almost frictionless, ideal liquid. In 2012, Li discovered that this same type of liquid had been produced at the LHC in collisions between protons and lead nuclei.

In a 2015 Rice News report about the research, Fermilab physicist Don Lincoln, wrote, "This result was surprising because when the proton hits the lead nucleus, it punches a hole through much of the nucleus, like shooting a rifle at a watermelon (as opposed to colliding two lead nuclei, which is like slamming two watermelons together). Li and his collaborators studied this surprising behavior by looking at six or eight particles simultaneously and how their directions correlated. This method is far more sensitive for identifying liquid-like behavior than the older method, which looked at particles two at a time. Li's group developed an algorithm called a trigger that records a small number of important collisions in the CMS detector among billions of candidates, allowing the researchers to efficiently investigate this interesting phenomenon."

Li said the PECASE funding will allow him to continue his studies of quark-gluon plasma at the LHC. In particular, he and his colleagues are hoping to observe tiny drops of quark-gluon plasma that result from collisions between pairs of protons. These droplets would be about 10 times smaller than any previously produced quark-gluon plasma, and they could reveal new insights about the workings of one of the four fundamental forces in nature, the strong nuclear force. 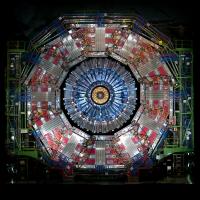