Known for their biodiversity richness, the Caribbean Islands are now adding two new species of bird-catcher trees to their list of botanical treasures. Commonly referred to as bird-catcher trees, the species whose ripe fruits are sticky and can be glued to birds, are from the four-o'clock family (Nyctaginaceae) and only found in Puerto Rico.

Baptised Pisonia horneae and Pisonia roqueae by authors Marcos A. Caraballo-Ortiz, doctoral candidate at The Pennsylvania State University, US and Jorge C. Trejo-Torres, researcher at The Institute for Regional Conservation in Florida, US, the two unusual trees were named to honor the unrecognised work of two extraordinary self-driven women who devoted decades on educational projects in botany. The research was published in the open access journal Phytokeys.

"Finding large organisms new to science from a relatively small and well-studied island seems implausible, but this recent naming of the two large trees from Puerto Rico proves that explorations in nature and museums can still produce exciting novelties." explains Trejo-Torres.

The two new trees belong to an extraordinary genus (Pisonia), containing rare plants mainly known for the ability to tangle birds with their sticky fruits, which inspired the common name "bird-catcher" used in the Pacific region. Characteristic for the two new trees are also swollen trunks that wrap over the rocks resembling an elephant foot with toes.

"Birds are the main dispersal agents for Pisonia trees, carrying the sticky fruits glued to their feathers to distant islands. However, sometimes these fruits can trap too tightly and even kills birds, as seen in documentaries." remarks lead author, Caraballo-Ortiz. "So far, we do not know of cases where birds have been trapped by the sticky fruits of the new species, but future studies will explore this possibility"

One of the trees, Pisonia horneae, is dedicated to Frances W. Horne (1873-1967), an American illustrator who spent 45 years painting 750 watercolors of plants from Puerto Rico, of which only a small fraction were published. The other tree, Pisonia roqueae, was named after Dr. Ana Roqué de Duprey (1853-1933), a Puerto Rican educator, writer, and suffragist. As an amateur ethnobotanist, she spent over three decades to prepare a manuscript aimed to make botany accessible to the general public, which was never published.

"It only seemed natural to name the two new species after these two extraordinary women who spent decades on large educational projects aimed to divulge botanical knowledge in Puerto Rico." explains Trejo-Torres. "Just like the two large trees remained unrecognised by science until now, the enormous efforts of these two women, who dedicated part of their lives to botanical work, remained largely unrecognised by the community."

"The scientific relevance of naming these trees is that they thrive in the Puerto Rican forests, including the Luquillo Mountains, which are among the most well studied areas in the world. World-scattered ecologists and conservationists actively working on Puerto Rican forests and plants now have a nice and surprising update to make in their databases." concluded Caraballo-Ortiz.

Funding organisations include the United States Department of Agriculture-Forest Service-International Institute of Tropical Forestry, The Institute for Regional Conservation, and The Alfred P. Sloan Foundation. 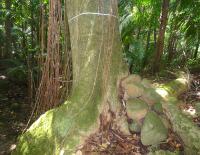