Researchers from Osaka University, in collaboration with the National Institute of Advanced Industrial Science and Technology (AIST) and Grenoble Alpes University, succeeded in efficiently controlling the direction of a nano-sized magnet by heating at high speed. The researchers also discovered that nano-magnets amplify microwave signals. This group's achievements will contribute to reducing power consumption of magnetoresistive random access memory (MRAM) and artificial intelligence (AI) devices. This will make AI devices read and write to their memory more efficiently, thereby suppressing the power consumption of AI functions such as machine learning and decision making. This is another step towards achieving a super-smart society.

Reducing the power consumption of information and communication devices means they could continue running for a long time, even in times of disaster. Spintronics is a widely-researched field in which MRAM technology has been developed using magnetic tunnel junctions (MTJs). MRAM uses the direction of a magnetic pole to store information, so it can retain memory without standby power. Using these technologies, researchers have tried to reduce the energy use of AI devices.

By controlling the magnetic alignment of an MTJ by using a small current and voltage, it is possible to reduce device power consumption. Spin-transfer-torque MRAM (STT-MRAM) has been developed; however, the problem is that its voltage increases rapidly when its write speed is high, causing a great deal of power to be used.

The research group has discovered that it is possible to write information using less energy than STT-MRAM by changing the magnetic anisotropy in an MTJ via controlling the applied voltage. To make this method practical, it is necessary to increase the magnitude of voltage-controlled magnetic anisotropy. In addition to finding proper materials, other methods for changing magnetic anisotropy have been sought.

First author Minori Goto says, "Our study is the first report of microwave amplification using spintronics devices. This research will open the way to developing high-performance microwave devices. Moving forward, we anticipate that our technology will be applied to new microwave devices with high sensitivity and high output. This will also contribute to low-power-consumption technology for MRAM and AI hardware." 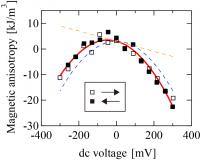