A series of papers recently published by scientists at the American Museum of Natural History suggests that polar bears in the warming Arctic are turning to alternate food sources. As Arctic sea ice melts earlier and freezes later each year, polar bears have a limited amount of time to hunt their historically preferred prey—ringed seal pups—and must spend more time on land. The new research indicates that at least some polar bears in the western Hudson Bay population are using flexible foraging strategies while on land, such as prey-switching and eating a mixed diet of plants and animals, as they survive in their rapidly changing environment.

"There is little doubt that polar bears are very susceptible as global climate change continues to drastically alter the landscape of the northern polar regions," said Robert Rockwell, a research associate in the Museum's Department of Ornithology. "But we're finding that they might be more resilient than is commonly thought."

Polar bears are listed as a threatened species under the United States Endangered Species Act and are classified as "vulnerable" with declining populations on the International Union for Conservation of Nature and Natural Resources' Red List. Climate warming is reducing the availability of their ice habitat, especially in the spring when polar bears gain most of their annual fat reserves by consuming seal pups before coming ashore for the summer. The new work, led by Rockwell and Linda Gormezano, a postdoctoral researcher in the Museum's Division of Vertebrate Zoology, examines how polar bears might compensate for energy deficits from decreasing seal-hunting opportunities.

In the first paper, published in spring 2013 in the journal Polar Ecology, the researchers provide, for the first time, data and video of polar bears pursuing, catching, and eating adult and juvenile lesser snow geese during mid-to-late summer, when the geese are replacing their primary flight feathers.

In the second paper, published in summer 2013 in the journal Ecology and Evolution, researchers used polar bear scat to show that the diet of at least some of the bears has shifted from what it was 40 years ago, before climate change was affecting the Hudson Bay lowlands. Today's polar bears are preying more on caribou as well as on snow geese and their eggs.

In the final paper in the series, published in December 2013 in the journal BMC Ecology, the researchers show that polar bears are, with a few exceptions, consuming a mixed diet of plants and animals. The predominance of local vegetation in collected scat suggests little movement among habitat types between feeding sessions, indicating that the polar bears are keeping energy expenditure down.

Taken together, the research indicates that during the ice-free period, polar bears are exhibiting flexible foraging behavior. This behavior likely derives from a shared genetic heritage with brown bears, from which polar bears separated about 600,000 years ago.

"For polar bear populations to persist, changes in their foraging will need to keep pace with climate-induced reduction of sea ice from which the bears typically hunt seals," Gormezano said. "Although different evolutionary pathways could enable such persistence, the ability to respond flexibly to environmental change, without requiring selective alterations to underlying genetic architecture, may be the most realistic alternative in light of the fast pace at which environmental changes are occurring. Our results suggest that some polar bears may possess this flexibility and thus may be able to cope with rapidly changing access to their historic food supply."

Funding for this work was provided by the Hudson Bay Project; the American Museum of Natural History; Churchill Northern Studies Centre; City University of New York; and Manitoba Conservation. 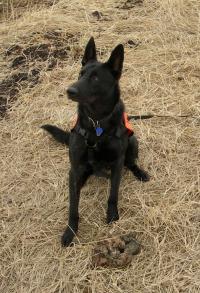 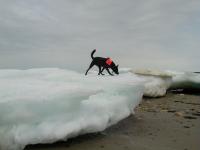