The Cuatro Cienegas Basin, located in Chihuahuan Desert in Mexico, was once a shallow sea that became isolated from the Gulf of Mexico around 43 million years ago.

This basin has an unusual characteristic of being particularly nutrient-poor and harboring a 'lost world' of many below-ground and above-ground aquatic microbes of ancient marine ancestry.

Because of these characteristics, it is an invaluable place for researchers to study and understand how life may have existed on other planets in our solar system.

In a recent study published in the journal eLIFE a team of researchers, including lead author Jordan Okie of Arizona State University's School of Earth and Space Exploration and senior author Jim Elser of the School of Life Sciences, conducted experiments in the Cuatro Cienegas Basin.

Their goal was to shed light on how fundamental features of an organism's genome - its size, the way it encodes information, and the density of information--affect its ability to thrive in an extreme environment.

"This area is so poor in nutrients that many of its ecosystems are dominated by microbes and may have similarities to ecosystems from early Earth, as well as to past wetter environments on Mars that may have supported life," says lead author Okie.

For their experiment, researchers conducted field monitoring, sampling, and routine water chemistry for 32 days in a shallow, nutrient-poor pond called Lagunita in the Cuatro Cienegas Basin.

First, they installed mescocosms (miniature ecosystems) that served as a control group and remained separate from the rest of the pond. They then added a fertilizer solution that was rich in nitrogen and phosphorus to increase microbial growth in the pond.

At the end of the experiment, they examined how the community in the pond changed in response to the additional nutrients, focusing on their ability to process biochemical information within their cells.

J. Craig Venter Institute associate professor Christopher Dupont, who is a senior author on the study, stated, "We hypothesized that microorganisms found in oligotrophic (low nutrient) environments would, out of necessity, rely on low-resource strategies for replication of DNA, transcription of RNA, and translation of protein. Conversely, a copiotrophic (high nutrient) environment favors resource-intensive strategies."

"This study is unique and powerful because it takes ideas from the ecological study of large organisms and applies them to microbial communities in a whole-ecosystem experiment," says Elser. "By doing so, we were able, perhaps for the first time, to identify and confirm that there are fundamental genome-wide traits associated with systematic microbial responses to ecosystem nutrient status, without regard to the species identity of those microbes."

What this may suggest for life on other planets is that organisms, no matter where they are, have to have information-processing machinery fine-tuned to the key resources around them. In turn, the supply of these resources will depend on the planetary environment.

"This is very exciting, as it suggests there are rules of life that should be generally applicable to life on Earth and beyond," says Okie.

Rules of life: From a pond to the beyond 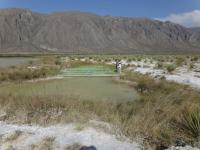 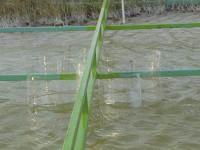