Spiders travel across water like ships, using their legs as sails and their silk as an anchor, according to research published in the open access journal BMC Evolutionary Biology. The study helps explain how spiders are able to migrate across vast distances and why they are quick to colonise new areas.

Common spiders are frequently observed to fly using a technique called 'ballooning'. This involves using their silk to catch the wind which then lifts them up into the air. Ballooning spiders are estimated to move up to 30 km per day when wind conditions are suitable, helping in their quest for new habitats and resources.

This dispersal strategy, however, involves a significant risk. The airborne spider has little control over where it travels and could end up landing on water, which has been thought to be unsuitable for its survival.

Lead author Morito Hayashi from the Natural History Museum, London, UK, said: "Even Darwin took note of flying spiders that kept dropping on the Beagle miles away from the sea shore. But given that spiders are terrestrial, and that they do not have control over where they will travel when ballooning, how could evolution allow such risky behavior to be maintained?"

"We've now found that spiders actively adopt postures that allow them to use the wind direction to control their journey on water. They even drop silk and stop on the water surface when they want. This ability compensates for the risks of landing on water after the uncontrolled spider flights."

The researchers collected 325 adult spiders belonging to 21 common species from small islands in nature reserves in Nottinghamshire, UK. The spiders' behavior was observed on trays of water in reaction to pump-generated air, and this was compared to their reactions on dry surfaces.

Many of the spider species adopted elaborate postures, such as lifting up a pair of legs, to seemingly take advantage of the wind current whilst on the water surface. This allowed them to 'sail' in turbulent, still, fresh, and salt water conditions.

By releasing silk on water, the sailing spiders also seemed to act like ships dropping their anchors to slow down or stop their movement. This suggests that the silk may sometimes work as a dragline for the water-trapped spider to attach to floating objects or to the shore. These behavioral adaptations could allow spiders to survive encounters with aquatic environments.

The research team also found that the spiders that adopted 'ballooning' behavior for airborne dispersal were also the most eager and able 'sailors'. The association between the two behaviors may indicate the importance of ballooners also being able to sail, which could be invaluable when landing on water.

Co-author Sara Goodacre from the University of Nottingham, UK, added: "Being able to cope with water effectively 'joins the dots' as far as the spider is concerned. It can move from one land mass to another, and potentially across huge spatial scales through the air. If landing on water poses no problem then in a week or two they could be a long way away from where they started."

Sailing behavior could also be helpful in non-ballooning spiders to increase survival near wet areas and after rainfall, including flooding events.

Seafaring spiders depend on their 'sails' and 'anchors' 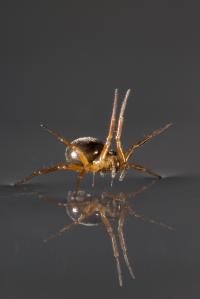 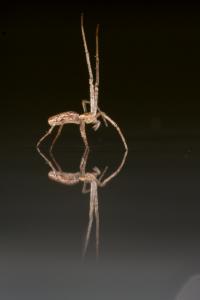