It is an awkward idea, but a couple's ability to have kids may partly depend on who else is present. The reproductive tracts of males and females contain whole communities of micro-organisms. These microbes can have considerable impact on (animal) fertility and reproduction, as shown by Melissah Rowe, from the Netherlands Institute of Ecology (NIOO-KNAW), and co-authors this week with an extensive overview in Trends in Ecology & Evolution. It may even lead to new species.

It appears to be such an intimate moment, with only the two of you... But you are not actually alone. In our reproductive tracts and in, on, and surrounding egg and sperm cells, lives a whole community of micro-organisms including bacteria, fungi and viruses. These microbiomes may influence our sexual health and fertility far more than we thought, sometimes in good ways and sometimes in bad ways. And this isn't just true for humans, but for all animals and even plants.

"We've all heard about the skin or gut microbiome and how these can affect our lives," explains evolutionary ecologist Melissah Rowe. "Well, guess what, there's more! We have a reproductive microbiome as well."

This is not just about sexually transmittable diseases. "Microbes appear to influence fertility, reproduction, and the evolution of animal species in so many ways," says Rowe. Sperm quality, mate choice, sexual health, success at producing offspring, the balance between female and male mating interests, general health, and even the origin of new species. "And yet, almost nobody is studying this, especially in non-human animals."

The ecology and evolution of reproductive biology and behaviour in animals, especially birds, is Rowe's field of research. Recently, she has started as a scientist in the Department of Animal Ecology with the Netherlands Institute of Ecology. She is interested in the impact of the reproductive microbiome. Together with colleagues from the University of Oslo (Norway), Oxford and Exeter (United Kingdom), Rowe composed an overview of all available scientific data.

A couple of examples. Men with large amounts of certain bacteria in their semen are more likely to be infertile. Female bedbugs ramp up their immunological defences ahead of mating, as males will pierce their abdomen with their genitalia during mating. The resulting infections from bacteria transmitted via the genitalia can be fatal. In mallard ducks, males with a more colourful bill produce semen that is better able to kill bacteria, thereby possibly influencing the females' partner choice for a 'safe' male.

Rowe: "I think that reproductive microbiomes may be an important, yet relatively overlooked, evolutionary force." Natural selection, but with bacteria and other microbes as the 'jury' and sometimes the 'executioner'.

As this research field is new and unexplored, many questions are still waiting to be answered. For example, are the positive or negative effects of the microbiome caused by specific species or is it the composition of the whole microbial community that is important? Do these reproductive microbiomes evolve differently in females compared to males? And can knowledge of these microbial communities improve our success at breeding endangered species, and reintroducing them back into the wild? "Let's find out." 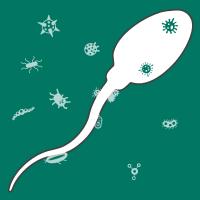